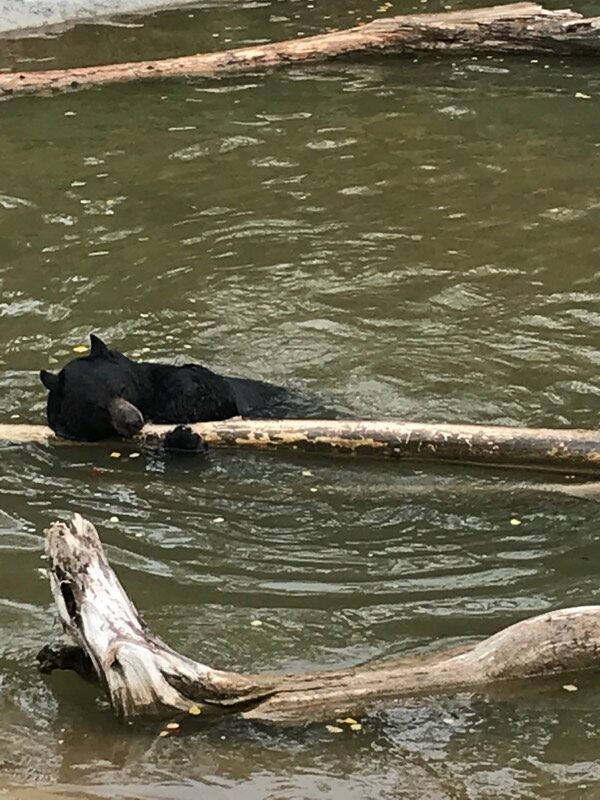 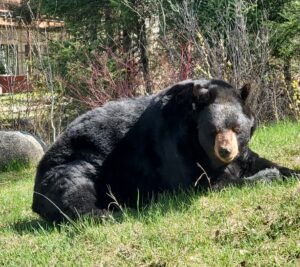 On Saturday morning staff and volunteers joined in to clean the straw out of Ted’s den. It always amazes me how 3 bales of straw can turn into 14 bales of straw by one big bear. While Ted was out, he strolled past the first enclosure where Lucky has been living. Lucky quickly moved to defend his area and Ted turned to face off with him through the fence. They gargled at each other, and Ted turned and walked away. He ate some grass on the mound and was about to return to his own den when Lucky blew at him. Ted quickly responded by running to the fence. He looked at Lucky and rubbed his head on the outside of the enclosure. Lucky sat down and Ted moved down the path to Tasha’s den.

Ted is currently on his meds for his cupping of his front paws. He is under my close supervision as well as his veterinarian. I appreciate the calls of concern and we are doing all we can to keep Ted mobile, comfortable and pain free. 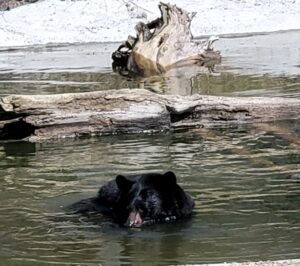 His next encounter was Holly who had taken over Tasha’s den temporarily. She blew at him and stood looking at him. Ted made some gentle grunts and then rubbed his head on her gate and she licked his head. He stayed by her for a few minutes but then left to return to his den.

During her morning breakfast Holly sat peacefully and enjoyed a head of romaine lettuce. The two females are still going into the big enclosure together. This will change in a short time as Holly comes into estrus; when this occurs, the girls will not be out together.

A week ago, Lucky pushed the remains of a dead tree over. He carried a piece of it up to a daybed area just beyond Ted’s den. He is still playing with it. Tasha rips open the logs to enjoy bugs and larvae. She often sits there because she can see when Holly is coming from the bunkers. Holly often ambushes Tasha by hiding in the brush or cutting Tasha off as she tries to get to her den.

Lucky posed for a few pictures as the bunkers were being cleaned. He’s such a handsome bear and I feel he knows it. It was a sunny day and he actually sat for the sun to hit him and warm his tummy.

Last weekend a quick storm hit Ely. Some areas got heavy rain and hail, high winds and then snow. One of the tall poplar trees broke in half and fell on the outside fence. When we suspect a weather situation, the bears are put in their individual enclosures for their own safety. That is why they were in over the weekend. I apologize for the inconvenience, but the safety of the bears comes first.

In other bear related news, Ted’s den is clean and soon we will have interns to clean the bunkers. It’s been challenging with the water due to low temperatures at night we’ve been unable to use the hoses. The good news is we are due for some warmer weather so the hoses will be going out. It makes a huge difference when we fill gallon after gallon and playful Tasha dumps hers for attention.

Thank you for all you do for the bears,