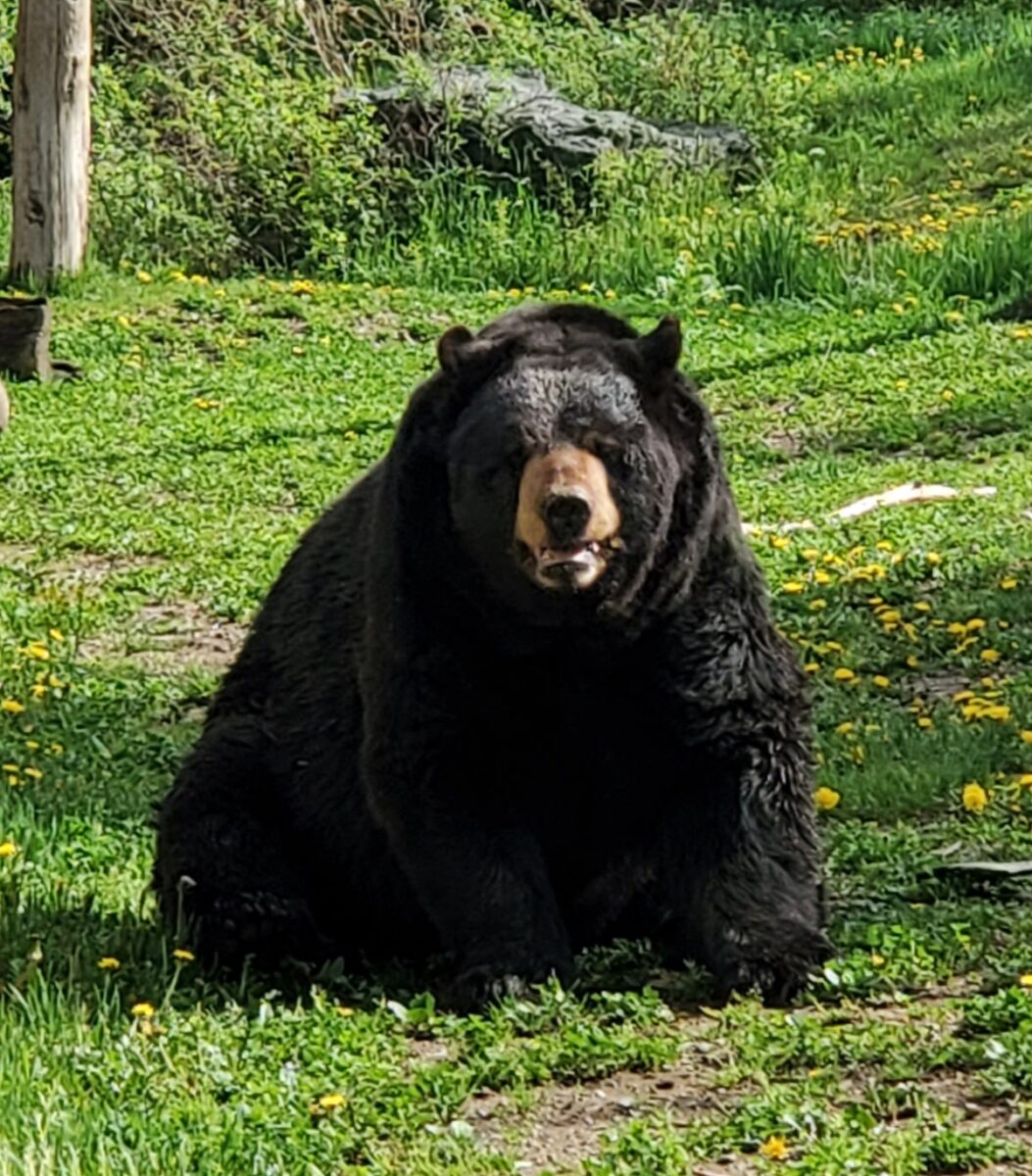 On Friday morning all bears were fed breakfast and locked in their own spaces. It was Ted’s turn in the big enclosure. It’s easier to work with Ted when he isn’t attentive to the other bears.

Ted’s enclosure gate was opened and he started on his way to the viewing area. He munched some grass as he went. He and Lucky had a brief encounter at the fence line while Ted sat down to eat grass.

Grass is rich in crude protein, as well as many vitamins and minerals. Some clover varieties provide nutrients to help reduce inflammation due to arthritis, meaning Ted knows what to eat to help him feel better. Here is a link to more information about white clover. https://helth.co/12-white-clover-benefits-for-health-and-more/.

Ted weighed 574 lbs. this week. He ate some trail treats and drank from the pond. Ted doesn’t like the logs arranged so close to the shore, so he chose to go into the stream/creek. His bath began as he splashed and washed his face, I commented, “first bath in 6 weeks”. He then went on a walk-about and marked cedar trees behind his den. Well done Ted; a long nap followed.

A few weeks ago Lucky pushed down a dead poplar tree. The base was about 9 inches in diameter. Lucky used his weight to push and push until the tree fell over. The bears have been enjoying the succulent bugs and larvae from the logs. Lucky is often seen with remnants of wood dust on his head. He also enjoys playing with the logs. As we look at the mound from the food shed, it appears he has carved a wooden replica of himself or maybe it’s a fox; let us know what you see. (See photo). Lucky weighed 441 lbs. this week.

Holly, oh my, what can I say, she’s in estrus and being a terror to Tasha. Tasha remains fairly calm but also defends herself; she tormented Tasha yesterday by marking Tasha’s enclosure and bluff charging her fence, her behavior changed with Ted. She approached his den and marked it and looked happy when he grunted at her. Oh Holly. Holly weighed 250 lbs. and Tasha weighed 277 lbs. this week.

With the rain that we’ve had this week, the flowers quickly turned into buds on the trees. The cottonwood seed filled the air yesterday and our hallway looked like someone had sheared a sheep. It has been hot this past week and the bear’s tubs are filled with water daily for their enjoyment.

The bears’ half birthday fundraiser is fast approaching. Mark the date – June 13th @ 10:00am for bear excitement. One of the best gifts the bears receive are the pinatas. They know there are treats inside and they become anxious when they see them. You’ll all have the opportunity to vote and donate for bear food and their care. Details coming very soon.

Our summer interns will be arriving soon. I always watch their expression and body language when they are introduced to the bears. One fun and memorable event is the half- birthday. The interns will be giving each bear their own pinata, with my help. They see how happy the bears are and how they display emotion. Throughout the summer the interns will learn and achieve many things but respect and gaining each bear’s trust is a major achievement. The bears are the best teachers, as I still learn so shall they.

Thank you for all you do,