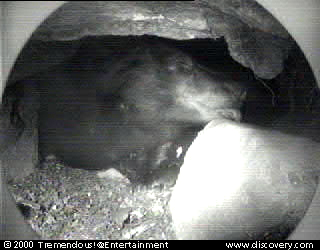 The fecal plug has long been one of the mysteries of bear hibernation. Early observers described it as a dense plug of unidentified material, fibrous plant material, and bear hair. They speculated that bears prepare for hibernation by eating indigestible plant material to purge their digestive tracts and form a rectal plug that prevents further eating. This erroneous speculation is still repeated in popular literature today.

Researchers at the Wildlife Research Institute in Ely, Minnesota found that the “unidentified” main mass of the plug is intestinal secretions and cells that continue to slough off the inside of the digestive tract during hibernation. This is not a mysterious process. Starving humans also continue to make small amounts of feces when they have no food intake. During 5-7 months in dens, bears accumulate feces in the lower 7-15 inches of the intestine to form a “plug” 1½ to 2½ inches in diameter. The fecal plug is simply feces that have remained in the intestine so long that the intestinal walls have absorbed the fluids out of it, leaving it dry and hard.

Remote cameras in dens revealed how hair and plant material become part of the plugs. The cameras revealed bears grooming more than was previously thought. In the process, they licked hairs and bits of bedding (leaves, grass, bark, etc.) from their fur and these indigestible items pass through the intestine essentially unchanged.

Where bears remain in dens for 5-7 months, pieces of footpads are also found in fecal plugs. In mid winter, the bears begin to shed the calloused soles of their feet, much as people shed calluses. Bears lick their tender feet and ingest pieces of the pads.

Although black bears are said to hibernate without eating, drinking, urinating, or defecating, most bears in northern regions remain in dens so long that they develop extra large fecal plugs. By the sixth or seventh month in the den, most of these bears defecate—usually near the den entrance. Fecal plugs have a light odor that is not unpleasant.