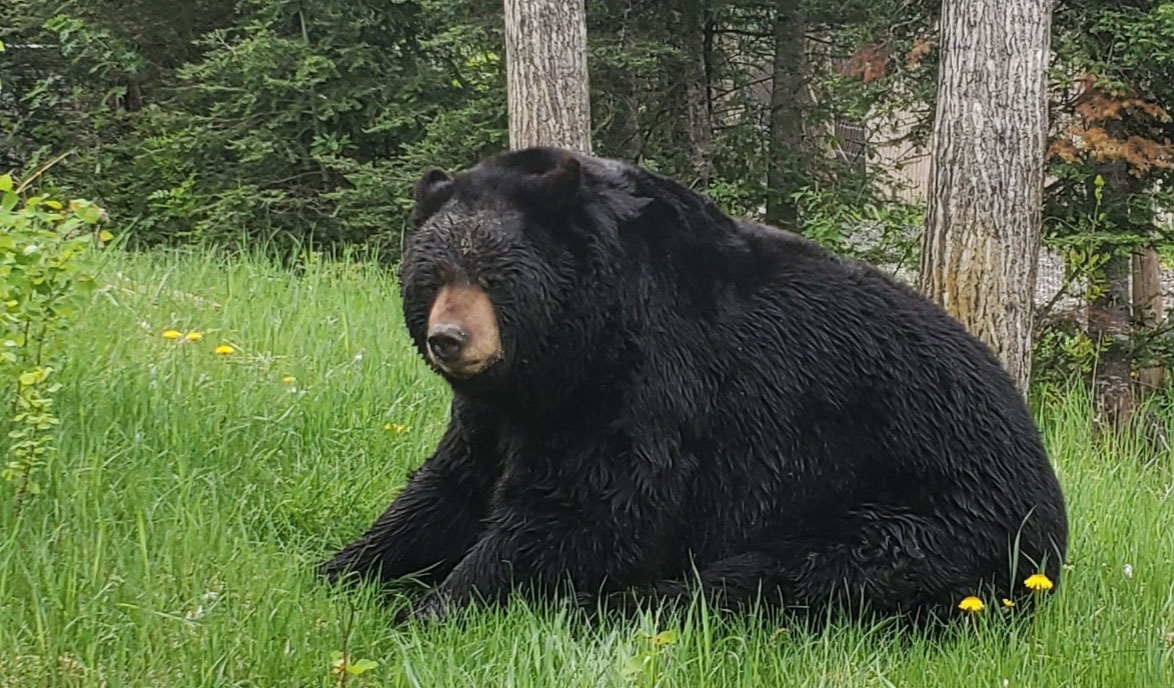 Thank you all for a successful 2021 season.

I want to thank our Pond Chat moderators, chatters, volunteers, visitors, Northwoods Bear Foundation, our Give to the Max team and all of you who support our bears.

I would like our two interns to know just how much they were appreciated this fall. Natasha is off to Georgia and Cassandra to Kansas, best wishes to each of you and thank you.

As the season comes to a close, Holly has hibernated, Ted, Lucky and Tasha are close to hibernation.

To end this season I want to share some pictures and a story about each of our bears.

As Ted is the oldest, I will start with a cute story about Ted. There are many favorites but you’ve heard many of them.

Last year in September Mary (volunteer) and I decided we would rake leaves and give a bag to Ted. Ted was resting while we worked. We put a bag in his chalet and waited to see what he would do. He walked to where his water bowl sits and stared at his chalet and then at us. It was very apparent he was disgusted with the mess we had put in his chalet.

After a few minutes of reading Ted’s mind we removed every last leaf. As soon as the leaves were gone Ted went into the chalet and had his nap. I’m sure he was saying, “What were they thinking? A fine bear like me only gets soft straw, not dirty leaves.” I won’t make that mistake again.

Lucky’s story is one from fourteen years ago. We had a summertime fun program which involved folks from the community making a jam or jelly and bringing it to the Bear Center for a Jamberry contest. The idea was for three human judges to taste each jam and then Ted would make the final decision as to which was the best. After the three men tasted each jam, it was put on a tray and was taken out to Ted. Lucky was just a 7-month-old cub and could fit inside the large logs that Ted would “preach” on. As the tray was put out for Ted, Lucky went inside the log and reached his long tongue up to get a taste. He saw Ted and ran over to me for protection; they had not yet made friends. Lucky stole the show. Ted licked each jam but Lucky had already picked the winner.

Holly’s story involved a camera. I had wanted to see if she was going to den in the dug den closest to the bunkers. Holly was in the viewing area when I thought I could sneak in, put the trail cam on the tree and get back out without her knowing. About an hour passed and I went to check on the camera because Holly had disappeared. The camera was gone. I found pieces here and there littered from the tree to 20 feet away. Holly sheepishly appeared sitting and watching. I said, “Did you take that camera?” Her guilt was so obvious. I along with two volunteers agreed they had never seen an animal with such a guilty look. To this day, Holly will destroy a camera given the opportunity.

Tasha had a “conference meeting” earlier this summer with four large ravens. She was sitting in her tub and the ravens were perched above her on the fence and in the trees. They seem to be having a meeting. As soon as they saw interns coming around the corner of the walkway they dispersed with great noise and flapping wings. Of course no one can interpret what was being discussed but I’m sure it had something to do with food and the interference of humans.