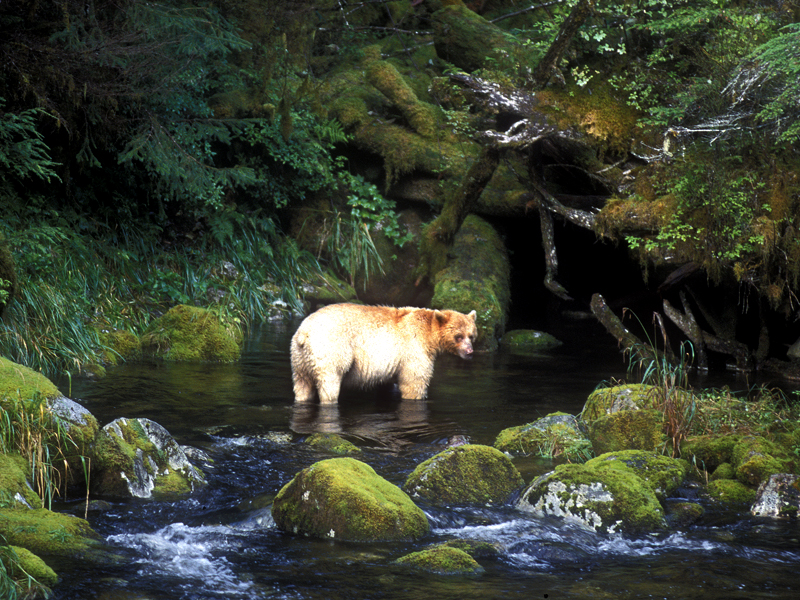 What is a Spirit Bear?

Most Spirit Bears live on Princess Royal and Gribbell Islands along the rainforest coast of British Columbia.  They are considered a subspecies of black bears called Kermode bears (Ursus americanus kermodeii).  About 20 percent of the bears on those islands are white; the rest are black.  On the mainland, the percentage of white bears drops off drastically with distance from those islands.

Dr. Kermit Rutland and Craig Newton studied the genetics of white black bears.  The white fur of Kermode bears is the result of a double recessive gene unique to this subspecies.  A single nucleotide replacement in the melanocortin-1 (Mc-1r) receptor portion of that gene causes it to produce adenine rather than guanine.  When both parents contribute this recessive gene, the result is white fur.

Outside British Columbia only about one in a million black bears is white.  One of these white bears, a subadult male, lived near Orr, Minnesota, in 1997.  Hair samples showed him to be genetically different from white Kermode bears.  Named Halo, he caused such a media stir that the Minnesota legislature gave protection to all white bears in the state, but Halo remains the only white bear ever reported in Minnesota.

However, the next sighting of a white black bear was only 200 miles northwest of Orr.  In 2000, a black mother with two white cubs turned up near Beausejour, Manitoba.  The genetics of this family were not studied.

In 2004, a black mother with a white cub was discovered about 300 miles northwest of Beausejour near Cedar Lake, Manitoba.  Named Maskwa, this white cub carried a new mutation on the same gene that determines coat color in Kermode bears.

These four white black bears are the only ones reported outside British Columbia in recent decades.