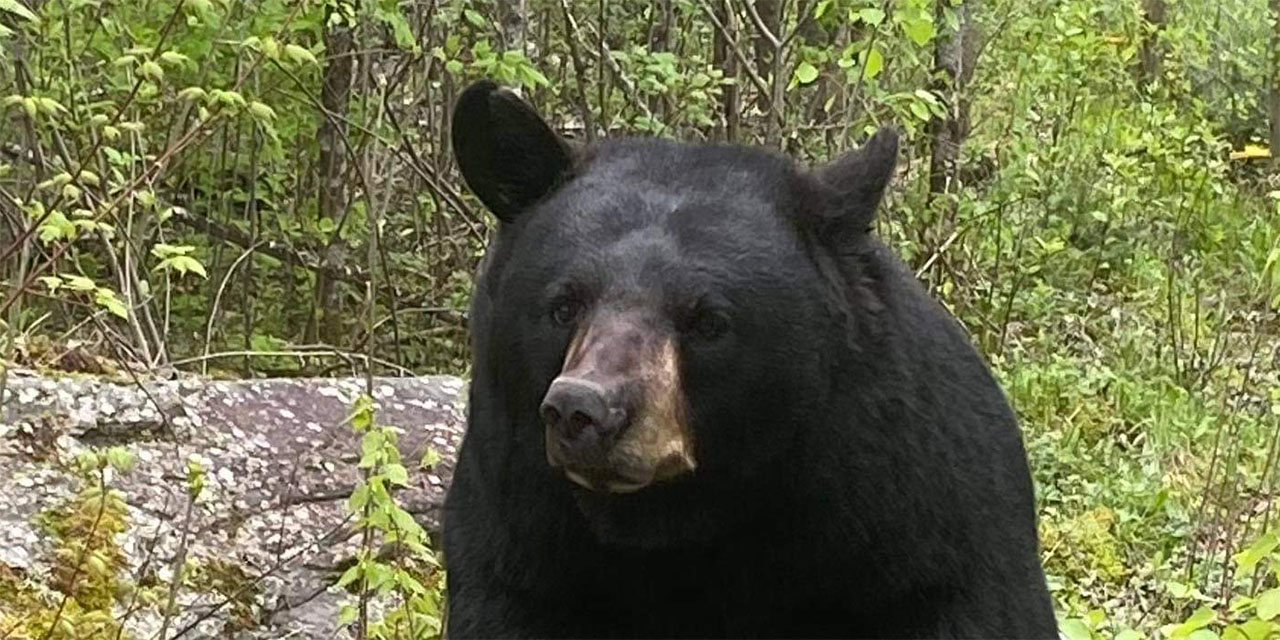 Ted plays with browse and a wild bear visits a relaxed Holly.

Why do we use enrichment? One of the ways we keep our bears mentally and physically healthy and stimulated is to use enrichment tools. Such as, the tubes, cubes and donuts. There are always treats inside. The bear is challenged to manipulate the enrichment toy to get the food out. Bears in the wild use their minds, mouth, paws and strength to get into logs, pull branches down for buds, seeds, berries. The spreads we do around the pond help the bear forage for food rewards. It is an example of how bears use their senses to find hidden treats. The logs in the pond are moved daily by Lucky as he exhibits his strength and playfulness as he cools down.

Another example is the use of browse. Browse is a young sapling or leafed out vegetation. It is given to animals as part of a natural diet. Aspen catkins and tender leaves are easily digested and can have medicinal properties to ease pain or inflammation.

Bear fact: The bears’ long sticky tongue, which can be 8 to 10 inches long, is also an adaptation for getting food. As an example, their tongue is long, sticky and agile for reaching into ant colonies and separating preferred and less preferred varieties and drop them out of the side of the mouth, from Dr. Rogers “Adaptations for Obtaining Food”.

The first wild bear paid a visit to a very nervous Holly near the bunker dens. The interns were thrilled that one, they got to see a wild bear, and two, they were asked to chase it away from the fence. There was no need to ask for volunteers, 3 of the 5 went to shag it away from the fence. The young bear must have thought an army was coming. It left the area quickly.

Although Holly is in estrus, she seemed very relaxed on Tuesday as interns and volunteers tried to get her into her enclosure before the group of 120 first graders arrived. She finally wandered in just before their arrival. It also allowed us the opportunity to prime the pond falls and remove a tree from Tasha’s den. We were experiencing very high winds. The tree that fell in Tasha’s den was going to be removed anyway. It was mostly rotten and would have fallen soon. The wind just helped it. Tasha was fine and went on her way. She has been showing off for the guests by sitting in her tub and playing with her paws.

Our Lucky bear has other entertainment ideas. He throws logs, sticks and pieces of wood in the air and rolls away as he does it. His area of preference is just behind the dens and over near Ted. He recently was seen holding his right paw up and favoring it. Spencer called and told me but he didn’t see what happened. Spencer checked it that evening, and I looked at it the next morning. While I was watching him, Lucky slapped at the gate and had his ears back and lip out, I looked, a raspberry pricker stem was laying on the top step. I’m pretty sure he stepped on it. His pads are sensitive to its prickers and made him uneasy. The stem was removed. Problem solved.

On Thursday, Ted had his big day out. He was out for his weigh check and a quick bath. On the way back to his den, he had a confrontation with Lucky through the fence. Lucky is hearing a different response from Ted and backs off. Good words from Ted.

Speaking of bears… which bear will get the get the strawberry piñata or how about the watermelon? Our Ted loves both. Then we have the star, everyone knows who the star is at the NABC. How about that donut, we have one little female that is rounder than the rest, will she get the donut? To place your votes/donations CLICK HERE.

I’m just having fun, please vote and vote many times, the bears will be very happy.

The bears were very excited to see the piñatas while the interns showed them initially. It’s fun not only for the bears but for the interns too. The donations go directly to our Bear Foods and Care account and this year we will be using these donations for new dens for the bears which are in the planning stages.

Needed bear foods are still on our Amazon Smile Wishlist, please check it out and if you can buy one of the items for your favorite bear, please do so. I am particularly in need of tart dried cherries for Ted. According to researchers at MSU tart dried cherries act better than aspirin to reduce pain caused by swollen joints and arthritis. https://www.sciencedaily.com/releases/1999/02/990201073255.htm.