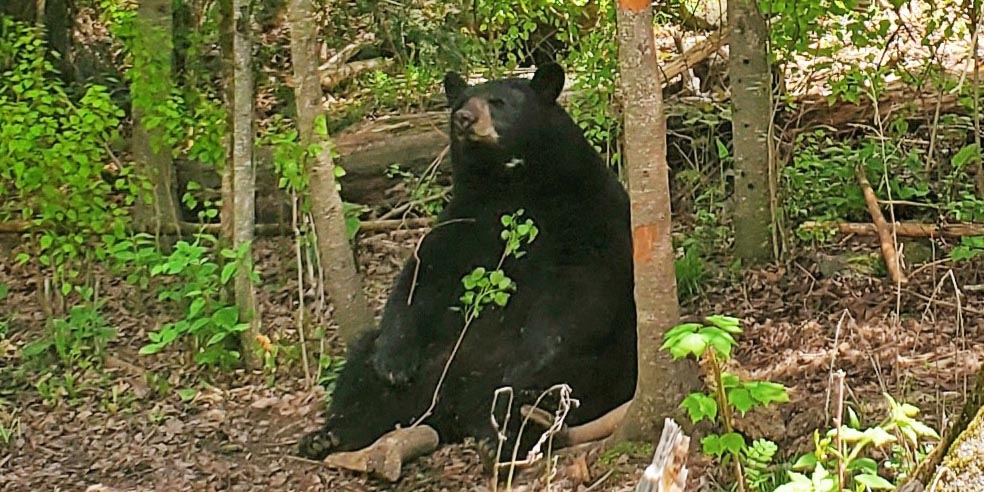 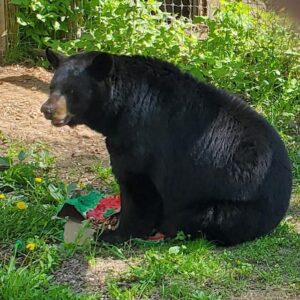 Holly with the watermelon 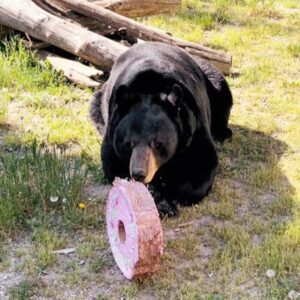 Lucky with the donut 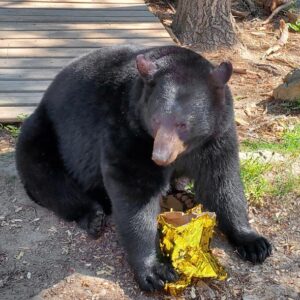 Tasha with the star 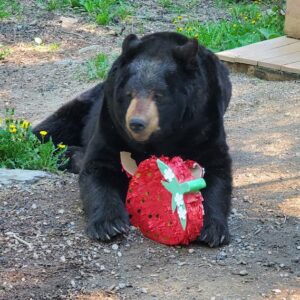 Ted with the strawberry

Happy Birthday to our ambassador bears. It’s all about the bears, and all of them enjoyed their piñatas filled with their favorite treats! Ted received the strawberry, Lucky the donut, Holly the watermelon and Tasha the star. It was a fun time for the bears. I want to thank everyone who voted/donated for the bears during our Half-Birthday fundraiser. Over $3,400 was donated and all of the monies will go towards new dens for the bears. We are humbled by your generosity.

Mating season: In late May we start to see signs that Holly is getting ready for estrus. She is definitely determined to have her way. We haven’t seen her make a choice of Ted or Lucky yet this year. To go along with that, Lucky hasn’t shown intentional interest in her either. It’s a mystery only the bears can solve.

Bear fact: Mating season in northeastern Minnesota is usually late May and can last into the first of July. Bears can be polygamous and cubs in the same litter cans have different fathers.

Lucky is neutered but his natural instincts to mate have not diminished. Ted, who is an intact male has never shown mating interest in either of our two females. As you know, we are not a breeding facility. Bears born in captivity must remain in captivity, the population of the American black bear is not in jeopardy. It is better for us to be able to take a rescued bear such as Lucky, Holly and Tasha. A bear can live over 30 years in captivity.

While doing a perimeter check for wild bears on Thursday we found Holly digging at her first den site which is by the bunker dens, this is where she hibernated in 2014. In 2016, Tasha took it over and hibernated there. I could hear the large rocks rolling against each other. Will she be like June bear and remove the rock? Holly’s current weight is 260 lbs.

On July 12, 2004. June bear worked to remove a 68 lb. rock from a den she would later use. While biologist and bear researchers watched and recorded, June removed the rock by smoothing the dirt to create a ramp and got it out. This video is on display with the rock at the bear center and also on our website.

Ted had his big day out on Thursday and currently weighs 555 lbs. The log arrangement in the pond made him choose the overflow creek for his bath. He splashed water on his face and cooled his body core down by resting in the cold water. With temperatures going up to the mid 70’s, it was a good day to cool off.

Dr. Rogers found on hot sunny days, around 73 degrees a bear’s black fur can be over 185 degrees, that is why they spend much of their time in the shade, in a pond or cooling their core on the cool ground.

Lucky has been stripping the cedars in the cabin den. He plays with the strips tumbling, throwing large pieces in the air and cruising the area in play. He is his own entertainer and ours as well. He currently weighs 430 lbs.

Tasha is in estrus and has positioned herself between the two males as she relaxes and plays with sticks and logs. She weighs 323 lbs. She still tries to get Holly to chase her. Holly is very acceptable to chase and sometimes a whack if she can get it in. The enclosure is her territory and with it being 2.5 acres it is continually marked.

Females as old as Holly (9) would hold a 6-to-8-mile territory in the northwoods. Holly does a great job of being a matriarch here at the bear center.

Our Amazon Wishlist will remain up all summer. Many thanks to everyone that made purchases this week from the list.