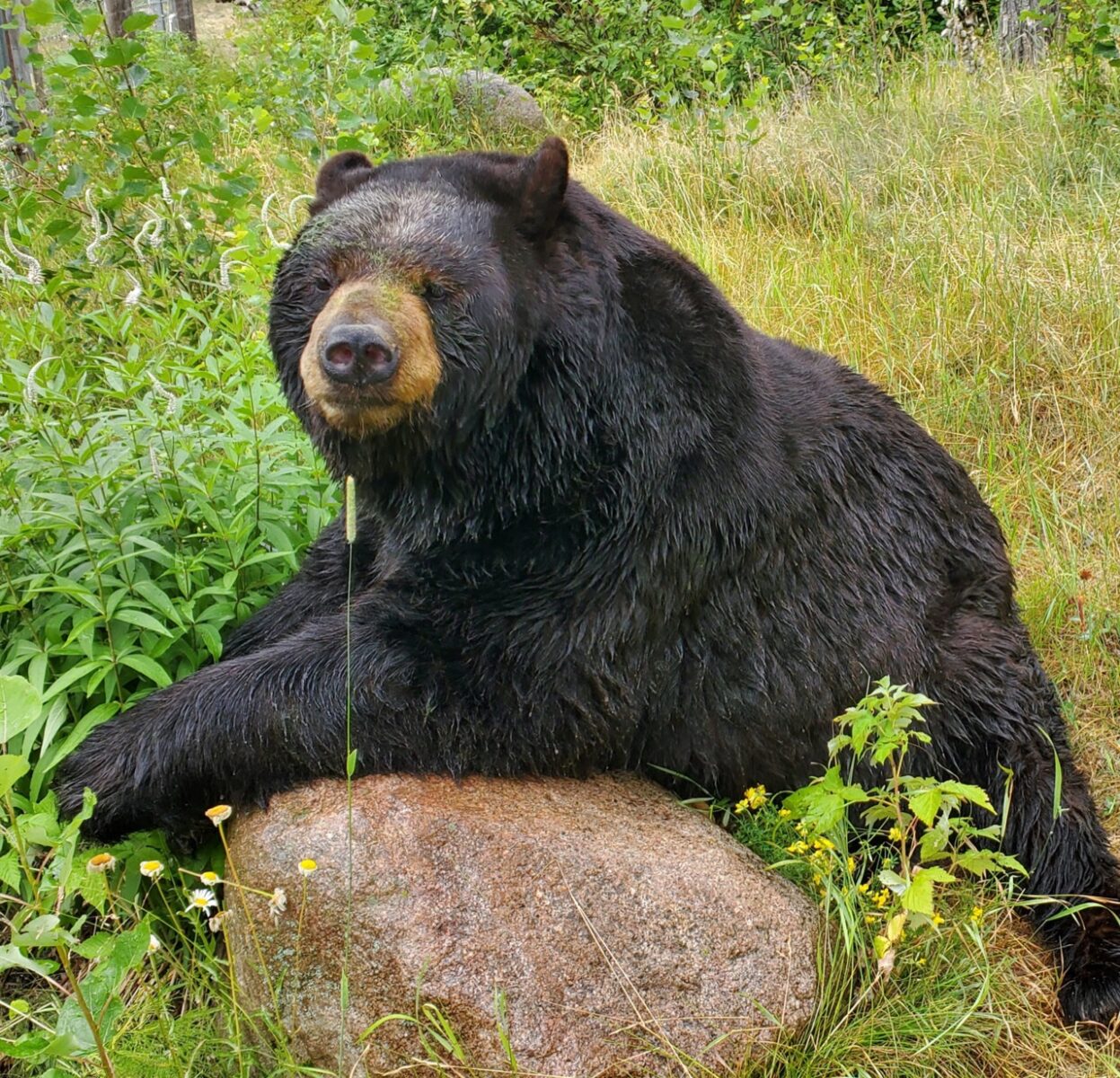 On July 23, the bears were put in their individual enclosures due to the possibility of bad weather. At approximately 6:55pm, the winds began to blow, the rain was so heavy I couldn’t see past my window. As the wind velocity picked up, trees swayed and cracked, branches and trees fell. In 10 minutes, it was over. Directly after the storm Spencer drove to check on the bears. Dr. Rogers arrived also. They did a perimeter check and reported downed trees but the bears were safe. Early Saturday morning, clean up and fence mending began.

Fun fact: Our bears positively love their bear bags and the good treats inside.

It’s that time of the year again—Bear Bag Auction. I’ve asked our dedicated interns to create a treat bag for their favorite bear. This year we have two extra interns, who are incredibly talented so they were asked to do a watermelon bag and a treat bag. All of the bags are delightfully designed to represent each bear by their favorite intern. 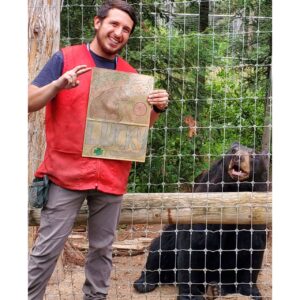 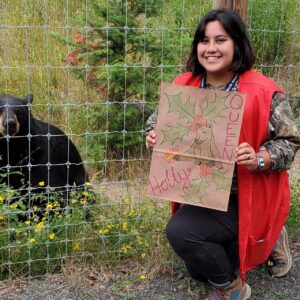 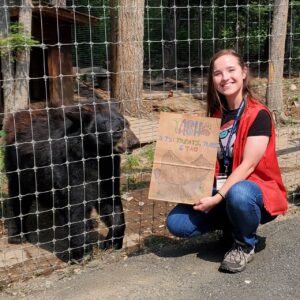 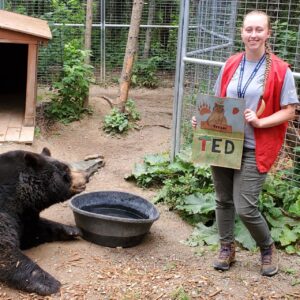 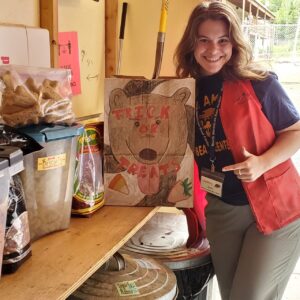 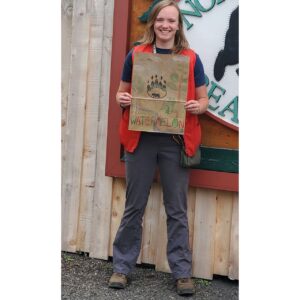 Bidding begins on July 25th at 2 pm and ends on July 31 at 2 pm. The bears will receive their bags on August 1. Stay tuned for time. To place bids for the bear treat bags, visit the Northwoods Bear Foundation Facebook page. Click here.

The highest bidder of each bag will have their name read as his or her special bear receives their bag. For example: Frederick from New Mexico has purchased the Lucky bear bag. We thank all of you for participating. All of the funds raised will go directly toward bear care and food.

On Monday the smoke from the fires in Canada filled the air. A smoky haze hung over Ely and the smell was obvious. The nightly news on Sunday predicted that The air quality in Ely would be poor. The bears did notice. Lucky was pacing but calmed as we opened his den door.

Holly and Lucky both discovered the ground hornet nests around the big falls. Getting stung never deters the bears from the rich yummy pupae found inside the nests. Holly actually got stung a few times. Lucky found the delectable treats too and got stung. He most likely put the blame on Holly, (just kidding).

Lucky, found a nice size log as he played in the pond, I guess he thought it would support his weight but alas he ended up tossing it.

In the summer of 2007, Ted found the filters to the pond and did use them as floatation devices.

The pond filters and the pond itself were replaced many times that summer. Lucky was just a cub at the time.

Ted went on a very lengthy walk last week. He must have been thinking, “Well, Sharon’s gone, I can stay out as long as I want, or until I get hungry.” He’s such a predictable bear. His tummy always wins.

Tasha is in full blow of her winter coat. She has such a shiny new flat coat but must first shed off the rest of her winter fluff. Her coat is very thick and heavy.

The interns think Holly is working on a den near the bunker dens. Is she re-creating her old den? Time will tell. It may seem early but bears do start dens in July. In fact, in 2004 June bear, one of the top research bears, began a den on June 19, 2004. It is also the den that she removed a 68-pound rock by creating a dirt ramp and pulling out of the den. She gave birth to Pete and George the following year.

The drought continues in the northland. Rain is often in the forecast but due to the many fires in Canada. It seems in this area the rain dissipates before it reaches the ground. Many of the trees are turning colors already too.

The wish list on Amazon is still available. I want to thank you all on behalf of Ted, Lucky, Holly and Tasha for purchasing bear food items. The bears enjoy their treats daily through enrichment and foods added to their dinners. Click here if you’d like to check out the wish list.