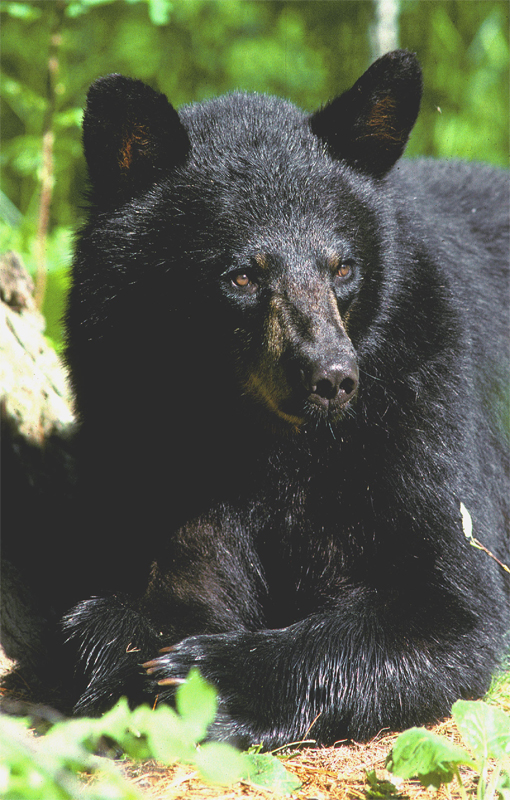 Black bears come in more colors than any other North American mammal. They can be black, brown, cinnamon, blond, blue-gray, or white. 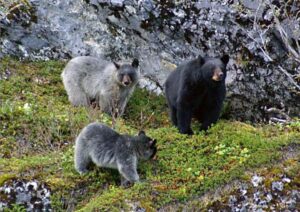 East of the Great Plains, nearly all are black. These were the first bears early settlers saw, hence the name. The melanin in black fur makes the fur resistant to abrasion in the brushy understory of eastern forests. In forested states that border the Great Plains, 5% to 25% are shades of brown rather than black. About 5% are brown in Minnesota. Blond or white individuals are rare in Minnesota, but a young white male was seen near Orr, MN, in 1997 and 1998.

In western states that have mountain meadows and open park-like forests, over half the black bears (Ursus americanus cinnamomum) are brown, cinnamon, or blond. Light colored fur reduces heat stress in open sunlight and allows the bears to feed longer in open, food-rich habitats. The lighter colored fur may also camouflage them from predators in those open areas. Ice Age predators undoubtedly used to kill black bears in open areas where the bears couldn’t escape up trees. Grizzly bears still do that in some areas today. 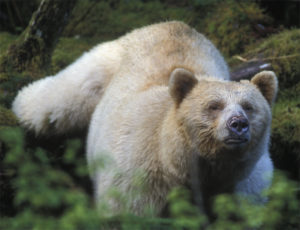 Some non-black black bears bleach in the sun. New dark brown fur can bleach to nearly blond by the time it is shed the next summer. Two rare color phases are found in coastal British Columbia and southeastern Alaska where populations are isolated by mountains. The Kermode bear, a subspecies of black bear (Ursus americanus kermodei), lives on a few islands along the coast of British Columbia. Most of them are black, but in some areas up to 20% are creamy white and called Spirit Bears.

Farther north, another subspecies, the Glacier Bear (Ursus americanus emmonsii), lives in southeastern Alaska. Again, most are black, but a few are dark bluish gray with silver-tipped guard hairs. Mountain glaciers that isolated this subspecies during the Ice Age are now gone or greatly reduced. The subspecies is now only semi-isolated from surrounding populations. As these bears integrate with surrounding populations, dominant black genes will make the rare blue-gray color phase even more rare.