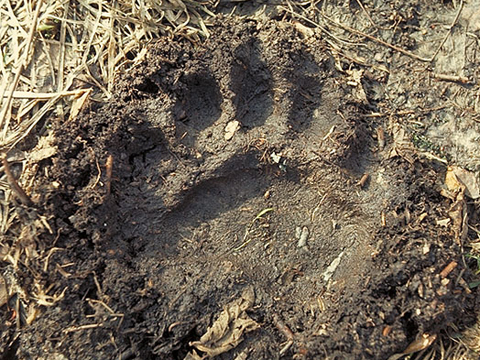 Bears walk on the soles of their soft feet, so they often do not leave distinct tracks unless they walk through soft mud or snow.

Bears have 5 toes on each foot.  Their large toe is on the outside of the foot and the small inner toe does not always register.

Footpads are bigger at the outer edges.  Front tracks are wider than rear tracks.  The small round heel pad of the front foot seldom registers.  The rear track is longer because the whole foot, including the heel, registers. They tend to toe-in, especially with their front feet.

Bears often follow deer trails and forest roads, but some trails are used mainly by bears.  These consist of a series of depressions created by multiple bears placing their feet in the same footsteps year after year.

Bear trails can be seen where bears approach favorite marking trees.  These trails are often especially distinctive because bears frequently stomp-walk as they approach such trees.  Stomp-walking is a form of scent-marking in which bears stomp, twist, and slide each footstep.