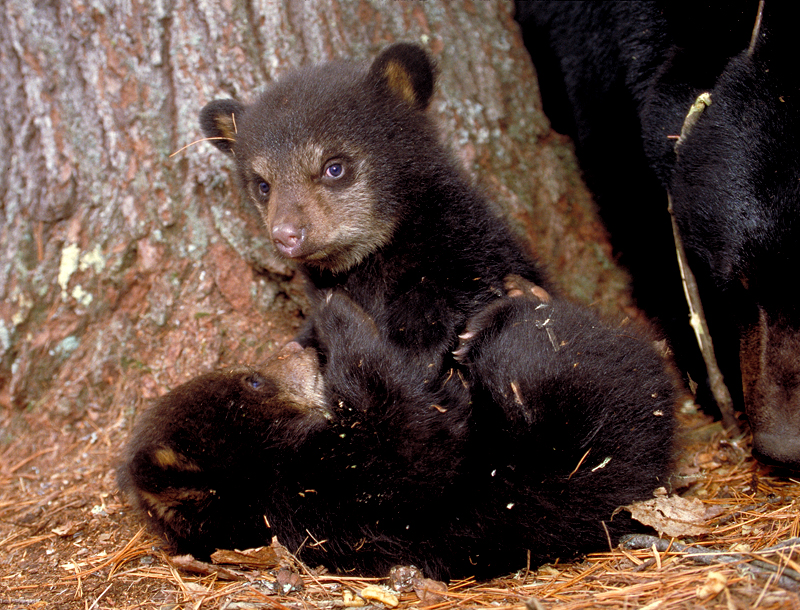 Why Do Bears Play?

Few animals play more than bear cubs do, but why they play remains a mystery.   Scientists have suggested that young animals might play to:

These all sound like good ideas, but none has been proven.  There is no consensus on why young animals risk injury and burn up energy in carefree activities simply to have “fun.”  Play is most elaborate and prolonged in young mammals whose behavior as adults is based in large part on learning—animals like bears, dogs, cats, and primates.

The cubs playing in this video are Pete and George, offspring of June, a wild bear that allows researchers to follow her as she forages and cares for her cubs. Pete is always playful and is the cub seen here that initiates play with his brother.  Filmed: 6/02/05

Some bear cubs play long and hard.  Others play much less.  Each has its own personality.  Well-fed cubs play more than malnourished ones.

Unlike children, bears play without vocalizing.  Cub play often looks like fighting but fighting is noisy.  Play is quiet, and play-bites are gentle.  Movie producers often make play look like fighting by adding growling sounds of lions or dogs, or fighting sounds of bears.

Researchers who walk with black bear families noticed that play often begins when a family reaches a puddle, an open field, or a soft pile of wood chips.

Bears play much less after they reach 1½ years of age and leave the security of their mothers.  Some siblings who played a lot when they were together as a family sometimes never play with each other again.

Three circumstances lead to play in older bears—courtship, having cubs to play with, and very abundant food.

Where food is so abundant bears don’t have to spend all their time looking for and competing for it, they often join up to roam and wrestle.  Most often, these play partners are unrelated adolescent males.  The largest group of play partners reported to date was a group of four yearlings (3 males and a female) that frequently traveled and played together in late July and August in an area of very abundant food.  All were from different litters.  Occasionally, they were joined by the female’s brother and by a 2-year-old male.  Females seldom play with each other.  Instead, they tend to be territorial competitors, even where food is abundant.

Play partners split up when food becomes scarce, but they remember each other and sometimes track each other down for brief meetings.  When conditions are right again, they sometimes join up and roam together again.

June and her cubs Pete and George appear in this video as well. George was collared to help monitor the timing of family breakup.

A springy tamarack sapling is also an invitation to play.  Bears recognize these supple trees from a distance and run and jump on them.  They climb up, ride the tops down, get off, and climb them again.  They walk the bent-over trees like tightropes, and play king of the mountatin with their mother and siblings.  Bears eat nothing from these trees, they just seem to enjoy them.