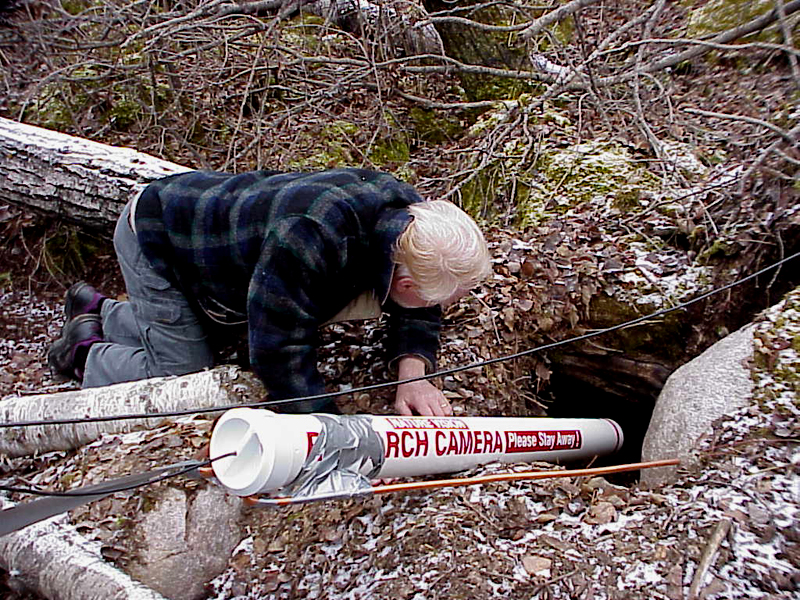 In fall 1999, Whiteheart gave researchers and the public the first views of how bears behave in the darkness of their dens when no one is around.

Whiteheart denned 120 yards from a house with a telephone and electricity. The homeowner let Ely researchers and Discovery Channel install an infra-red den cam and send images of Whiteheart to Discovery Channel headquarters in Maryland and on to the internet.

Ely researchers and the public learned together as they watched this hibernating bear from indoor comfort. The web site received over a million hits as people downloaded images of Whiteheart from December 6, 1999, to April 8, 2000.

Viewers learned that bears are more active in dens than anyone imagined. Whiteheart groomed, shifted position, and rearranged bedding.

Whiteheart had entered the den with a good layer of fat, which gave her energy to burn, so she did not have to reduce her metabolism as much as skinny bears do. She turned three years old in January, raising the possibility of cubs, but she did not give birth.

Since that time, only one bear has denned close enough to a telephone and electricity to repeat the project. In the fall of 2007, gentle Solo and her nearly year-old cubs denned under an unoccupied cabin. However, the owner was concerned about liability and the bears were removed.

We remain indebted to the owners of the property where Whiteheart denned for providing us with the unique opportunity to study her hibernation—and share the unprecedented view with the public.