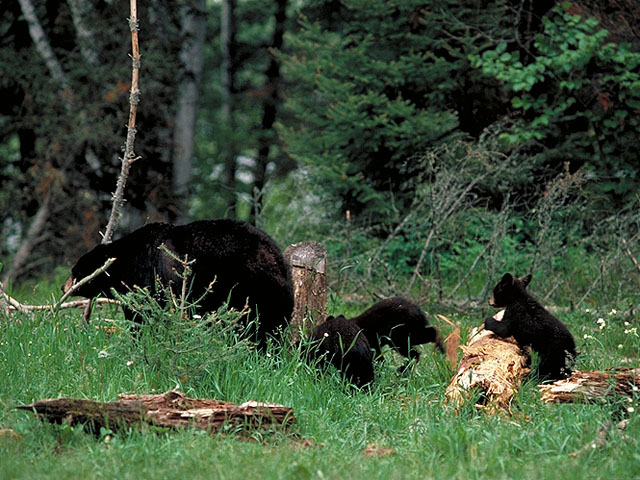 What Does Steve Herrero Say About Mothers Defending Cubs?

“Researchers studying black bears confirm that black bear females are seldom aggressive, even when harassed. Al Erickson, who made the pioneer study of black bears in North America, captured 96 bears 109 times in the late 1950’s and early 1960’s.  He stated that most female bears did not display strong maternal protective instinct and quickly abandoned cubs when danger was imminent. In only 3 of 10 cases were females detected in the vicinity of cubs he trapped.  Two of those mothers attempted to drive off the handling crew by rushing forward, snorting, and rapidly chomping their teeth.  At no time did they approach closer than 10 feet.  A particularly aggressive charge could be terminated by loud shouting, which seemed to unnerve the animal.”

“El Harger, a Michigan wildlife biologist who studied black bears after Erickson, reported that in trapping and handling more than 300 bears, only 4 times did females run them off while they were removing cubs from live traps.”

(Editor’s note.  In the 40 years since Erickson and Harger studied bears in the 1960’s, researchers have learned that:

“Lynn Rogers’ experiences handling black bear cubs offer conclusive evidence regarding the reluctance of black bear mothers to attack people.”  Quoting Rogers, he wrote, “In 18 cases during our black bear studies we treed or otherwise captured cubs with their mothers present.  None of the mothers made contact with us even when we held their cubs and the cubs bawled.  The mothers typically stayed in brush cover and huffed.  None approached closer than 20 feet; one repeatedly bluff-charged to that distance, retreating after each charge.  One mother apparently left with her remaining cubs after I chased one cub up a tree and captured it.  In 9 cases in addition to the above 18, I released cubs that various trappers had trapped.  In these 9 cases the mothers were not present.  However, in 2 of these cases, both the mothers and cubs were radio-collared, and the families reunited within an hour.”

(Editor’s note.  In the 20-plus years since Rogers made that statement, Bear Center researchers have had 2 mothers come closer than the usual 10-20 feet.  One of them was the bluff-charging mother seen on the Black Bear / Communication page.  The other was a mother who charged right up to a researcher.  He tried to run backward but tripped and fell on his back.  The mother stood over him as he lay watching her in fear.  She shortly returned to her cubs without touching him.  He got up and followed the family uneventfully for 2 hours until they lay down for a nap.)