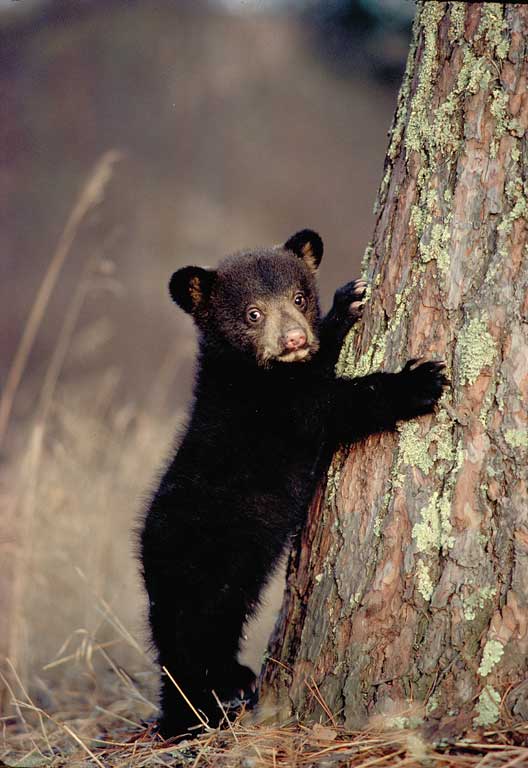 Folklore: Perhaps no other animals have so excited the human imagination as bears.  References to bears are found in ancient and modern literature, folk songs, legends, mythology, children stories, and cartoons.  Bears are among the first animals that children learn to recognize.  Bear folklore is confusing because it is based on caricatures, with Teddy Bears and the kindly Smokey on one hand and ferocious magazine cover drawings on the other.  Dominant themes of our folklore are fear of the unknown and man against nature, and bears have traditionally been portrayed as the villains to support those themes, unfairly demonizing them to the public.  A problem for black bears is that literature about bears often does not separate black bears from grizzly bears.

General Description: The black bear is approximately 4 to 7 feet from nose to tail, and two to three feet high at the withers.  It has small eyes, rounded ears, a long snout, a large body, a short tail, and shaggy hair.  It differs from grizzly bears in being smaller with a smaller shoulder hump, a furred rear instep, a less concave facial profile, smaller claws that are more tightly curved, and longer, smoother, and more tapered ears.

Taxonomists generally separate black bears into 16 subspecies based on minor differences in appearance and DNA: Ursus americanus altifrontalis (Pacific Northwest), U. a. amblyceps (Southwestern US), U. a. americanus (widespread from Alaska to the Atlantic), U. a. californiensis (interior California), U. a. carlottae (Queen Charlotte islands of British Columbia), U. a. cinnamomum (WY,  eastern CO, ID, western MT, southwestern Alberta, southeastern British Columbia), U. a. emmonsii (coastal AK from Glacier Bay to Prince William Sound), U. a. eremicus (northeastern Mexico and the Big Bend area of Texas), U. a. floridanus (FL, southern GA, southern AL), U. a. hamiltoni (Newfoundland), U. a. kermodei (portion of coastal BC), U. a. luteolus (southern LA, and southern MS), U. a. machetes (northwestern Mexico), U. a. perniger (Kenai Peninsula of AK), U. a. pugnax (southeastern Alaska), U. a. vancouveri (Vancouver Island).  Taxonomists update subspecies classifications as they learn more about regional differences in DNA, body form, and behavior.

Names: Some black bear subspecies go by different names, like Kermode bear, Cinnamon bear, or Glacier bear, but they are all black bears.  We prefer calling male and female bears simply males and females, but many people call them boars and sows, like pigs.  Although pigs and black bears are both omnivores, they are not related.  A group of bears is sometimes called a sloth of bears after the Middle English slowthe, meaning slow.  The term is inaccurate because bears are not slow, lean bears can run in excess of 30 mph and few people use the term anymore.

Range: The American black bear is found only in North America.  The population is estimated at 750,000.  They live in forests as far south as Florida and northern Mexico and as far north as forests grow in Alaska and Canada.  In northern Labrador, where grizzly bears no longer live, black bears range out onto open tundra where there are no trees to escape into.  People are becoming more tolerant of black bears as we learn more about them.  Many people are enjoying having bears live close to them where the bears were once feared and killed.

Adult Weights: Wild male black bears of breeding age usually weigh between 125 and 500 pounds, depending upon age, season, and food.  Very well fed bears can be heavier. The heaviest bear was claimed be a male shot in 1972 in New Brunswick that weighed 902 pounds after it had been dressed, estimated to be over 1,000 pounds in life.  Wild females usually weigh between 90 and 300 pounds with the heaviest known female weighing 520 pounds in northeastern Minnesota on August 30, 1993.  Black bears in captivity may exceed these records.

Adult Length: 50 to 80 inches long, nose to tail, with males being larger than females.

Mating Season: Usually from late May to early July.  In the eastern deciduous forest, mating season can extend into August.

Number of Cubs: The number of cubs in a litter is usually 2 in the western United States and 3 in the eastern United States.  First litters are often only 1 or 2.  Litters of 6 have been reported in several eastern states.

Fall Weight of Cubs: By their first fall, cubs may weigh as little as 15 pounds or more than 165 pounds, depending on food supply.

Parental Care: Cubs usually stay with their mother for 16-17 months (rarely 29 months).  One to six days before the mothers are ready to mate in late May or June, they force their yearlings to stop traveling with them.

Age at Production of First Cubs: 2 to 11 years, depending upon food supply.  Typically 3 to 7 years.

Interval Between Litters: Typically 2 years, but it can be 3 or 4 years if food is so scarce that they have to abort their blastocysts, embryos, or fetuses.  If a litter is born but dies before the mating season, the mother will mate again and produce cubs in consecutive years.

Sex Ratio: Nearly 50:50 at birth.  Males are killed by people at a higher rate, though, so the sex ratio among mature bears is often one male per 2-5 females.

Vision: Bears see in color and have good vision close-up.  Their distance vision (over two hundred yards) has not been tested.

Smelling: Their smelling ability is extremely good.  The limits are untested.  Their nasal mucosa area is about 100 times larger than in humans.

Sounds: Usually silent (except in movies in which sounds are dubbed in).  A variety of grunts in amiable situations.  Loud blowing noises when frightened.  Clack teeth when frightened.  They use a resonant, humanlike “voice” to express a range of emotions from pleasure to fear.  Does not threaten by growling (except in movies).  In story-telling, any sound a bear makes is called a growl.

Swimming Ability: Good.  Speed and distance limits are untested.  Can swim at least a mile and a half in fresh water.  One swam more than 9 miles in the Gulf of Mexico.  Can swim to island campsites.

Daily Activity Period: Most bears become active a half-hour before sunrise, take a nap or two during the day, and bed down for the night an hour or two after sunset.  However, some bears are active at night to possibly avoid people or other bears.

Do bears hibernate?  When hibernation was defined simply in terms of temperature reduction, bears were not considered hibernators.  New knowledge of hibernation processes has led biologists to redefine mammalian hibernation as simply a specialized, seasonal reduction of metabolism concurrent with the environmental pressures of scarce food and low ambient temperatures.  Black bears are now considered highly efficient hibernators, they have insulative pelts and have lower surface to mass ratios than the smaller hibernators.  As a result, bears’ body heat is lost very slowly, enabling them to cut their metabolic rate in half and still make it through winter, maintaining temperatures above 88 degrees–within 12 degrees of their normal summer temperature.  (Excerpted from “A Bear In Its Lair” by Lynn Rogers, Natural History Magazine, October 1981).  Mothers wake up to give birth and take excellent care of the cubs in the den, licking them clean and responding to every cry for warmth and milk. Wild mothers ingest their cubs’ urine and feces. They also lick up drops of meltwater, eat snow and icicles, urinate, and defecate.

Length of Hibernation:  The length and depth of hibernation is genetically programmed to match the regional norms of food availability.  Hibernation is deeper and can last over 7 months in the northern portion of the black bear range where abundant, high quality food is available only from May through August.  There, some bears hibernate so deeply, especially the leaner bears after a summer of unusually scarce food,  that a person can jostle them for several minutes before they wake up.  However, in southern states where food is available year-round, some do not hibernate at all, and those that do are easily aroused.

Potential Longevity (lifespan): Black bears can live 21-39 1/2 years or more if they are not killed.

Causes of Death: In Minnesota, black bears less than 16-17 months old typically die from starvation, predation, falls from trees, and other accidental causes. A very few die from parasites or disease. Very few adult black bears die of natural causes except in national parks. Nearly all adult bears die from human-related causes. A few are killed by vehicles. Most are shot. The average age at which bears are shot in Minnesota is 2 for males and 3 for females.

Ideal Habitat: Black bears like large forests with many different kinds of fruits and nuts.  Small sunny openings within the forest provide many kinds of food for the bears.  Lowlands and wetlands provide tender and juicy vegetation.  Streams and woodland pools provide water for drinking and cooling.  Mothers with cubs like large trees (over 20 inches in diameter) with furrowed bark (like white pines or hemlocks) for bedding sites.  These trees are safest for small cubs to climb.

Living with Bears: Many people are moving into black bear habitat.  The bears’ future depends on how well we understand and tolerate them.

Long-Term Problem: Magazines and movies have given black bears an unrealistically ferocious image, causing people to fear them excessively and kill them unnecessarily.  There are many misconceptions about black bears.

Greatest misconception: The greatest misconception about black bears is that they are likely to attack people in defense of cubs.  They are highly unlikely to do this.  Black bear researchers often capture screaming cubs in the presence of bluff-charging mothers with no attacks.

Defense of cubs is a grizzly bear trait. About 70 percent of human deaths from grizzly bears are from mothers defending cubs, but black bear mothers have not been known to kill anyone in defense of cubs.