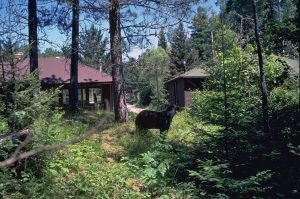 Living with Bears: Many people are moving into black bear habitat. The bears’ future depends on how well we understand and tolerate them.

Misconceptions: People have demonized bears in many ways, giving bears an unrealistically ferocious image. People are unwilling to coexist with animals they fear, so they kill many black bears unnecessarily. A related misconception is that mother black bears are likely to attack people in defense of cubs. They are highly unlikely to do this.

Black bear researchers often capture screaming cubs in the presence of bluff-charging mothers with no attacks. Defense of cubs is primarily a grizzly bear trait. About 70 percent of human deaths from grizzly bears are from mothers defending cubs, but mother black bears have not been known to kill anyone in defense of cubs. As of 2008, only 3 of the 61 deaths from black bears since 1900 across North America were by mothers with cubs, with scant evidence defense of cubs was a factor.