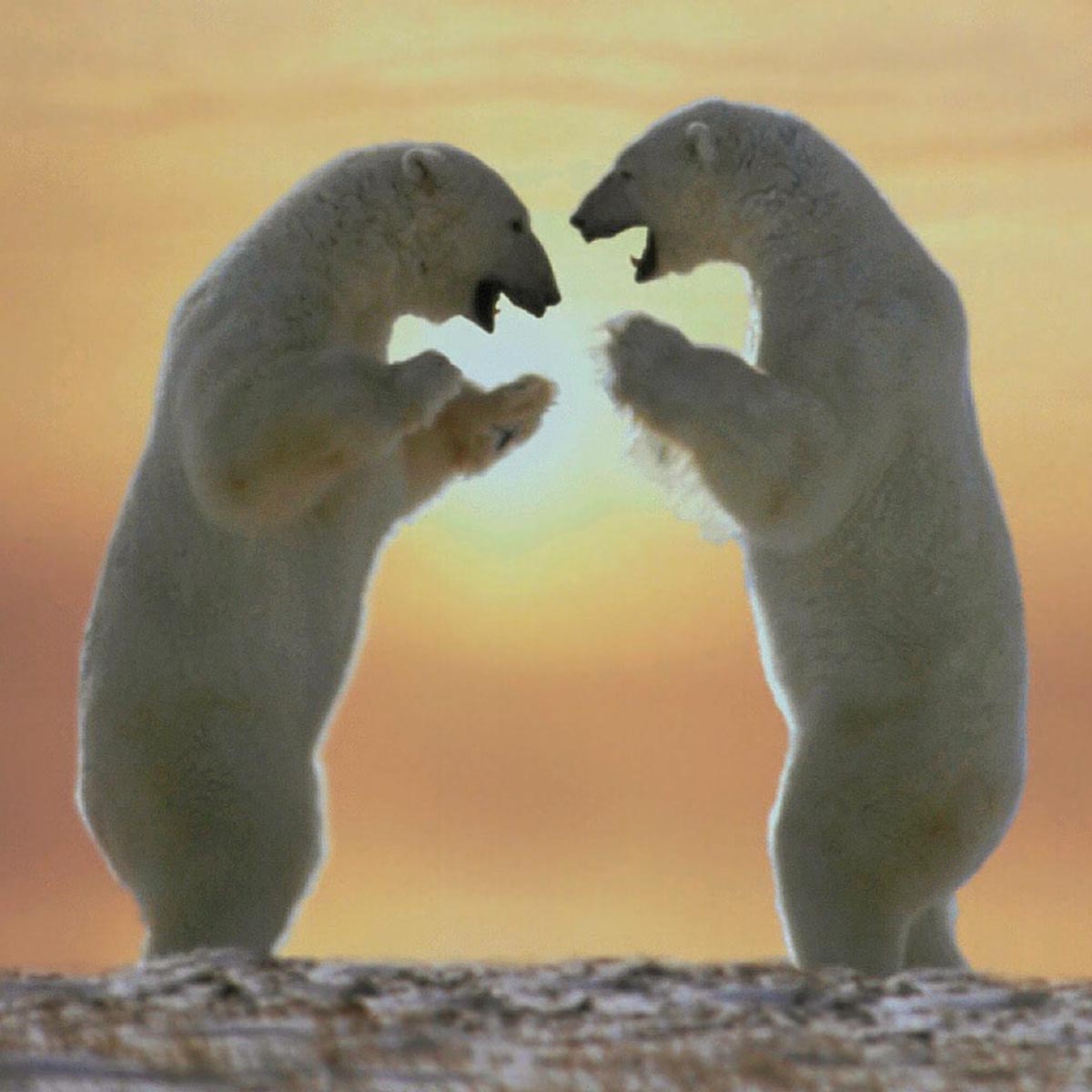 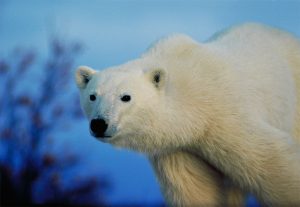 Taxonomy: The scientific name for the polar bear is Ursus maritimus, which means ‘Sea Bear’ in Latin.

Distribution and Population: Polar bears are found throughout the ice-covered waters of the Arctic region and prefer to remain out on the sea ice all year if possible.  The sea ice provides a platform from which polar bears can hunt.  As the ice retreats north during the summer months, polar bears travel with the ice floes and continue to hunt seals (Stirling and Guravich 1990, p 61).

Scientists estimate there are between 25,000 to 40,000 polar bears in the world.  They also believe the polar bear population is divided into 6 core populations, with members of each core never mingling with the other core populations (Lynch 1993, p 6).

While there has never been a conclusive study to determine the exact population of polar bears, there have been studies conducted on sub-populations: 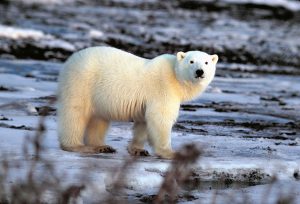 Home Range: The size of a polar bear’s home range depends upon the annual pattern of freezing and break-up of the sea ice.  A polar bear’s territory may be small if the bear has constant access to ice and seals.  In areas such as Greenland, the Bering Seas or Chukchi, the bears may have to relocate many hundreds of kilometers each year to remain on the ice where they can still hunt seals.  A polar bear learns the seasonal pattern of movements as a cub during the 2 years it remains with its mother (Stirling and Guravich 1990, p 68).

Description: A polar bear has an elongated body, with low, well-developed shoulders.  They have a long thin but well developed neck, highly developed hindquarters and a straight profile (Brown 1993, p 51). 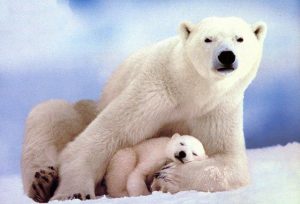 Height: From the bottom of the paw, standing flat on the ground, to the highest point on the shoulder, a polar bear can reach up to 5.3 feet in height.  From the tip of the nose, to the tip of the tail, polar bears generally range from 8 to 8.4 feet in length (Brown 1993, p 63-64).

Teeth: Healthy adult polar bears have a total of 42 teeth – incisors, canine, premolars (for biting) and molars (for shearing).  (Stirling and Guravich 1990, p 24)

Feet: Polar bears have large feet, which help propel them through the water as they swim.  When they are on the ice or snow their feet act as snowshoes by spreading out their weight and keeping the bears from breaking through (Stirling and Guravich 1990, p 24).  Their feet are flatter than those of other bears and are useful for shoveling snow when building dens (Brown 1993, p 73).

The pads of the polar bear are covered with small papillae, which increase friction between the foot and the ice.  There are also small depressions in the pad that function as little suction cups and increase the grip of the polar bear’s paws on the ice when it runs (Stirling and Guravich 1990, p 25).

Tracks: A polar bears forepaw is approximately 5 ¾ inches long and 9 inches wide while the hindpaw usually measures 13 inches long and 9 inches wide.  The toes form an arc similar to a black bear’s track.  A polar bear’s track is generally only visible in soft snow or mud and may show fringed edges due to the hair on the paw (Brown 1993, p 76).  The bottom of the paw is completely covered with fur.  The claws are black, short and stocky and are usually not visible in the track (Stirling and Guravich 1990, p 39).

Head: As a cub, the polar bear’s head is small with delicate features and the fur is whiter than that of older bears.  By 8 months, cub’s face begins to fill out.  By 2-5 years old the face gets longer but not wider.  By 5 years and older the facial muscles develop and the face gets wider (Stirling and Guravich 1990, p 40).

Ears/Hearing: Polar bears have small fur covered ears and sensitive hearing.  Even the inside of the ear is covered with fur to protect against the cold temperatures.  When a bear dives underwater the ear canals close (Brown 1993, p 81). 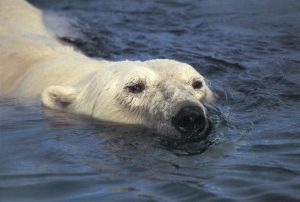 Diet: The most important time for a polar bear is during the months of April through July when the ringed seals are abundant.  Polar bears must take advantage of the good hunting to prepare for the times when their stored body fat is the key to survival.  This is the time of the year when they replenish their body fat.  A polar bear has to solve two physiological problems; maintaining their body temperature in a cold climate, and being able to store enough energy to last between meals that could be days or even months apart (Stirling 1990, p 143).  Ringed seals form the basis of their diet during these months (Lynch 1993, p 64).  They usually kill a seal every 5-6 days.  Polar bears can consume up to 150 lbs. of food at one sitting due to the fact that their stomachs are very large.  As a result of this, they can go weeks without eating.

During April – July, polar bears will usually eat only the skin and blubber of seals. If they kill a newborn pup, they most likely will not eat it (Lynch 1993, p 66).

Hunting: Polar bears utilize two different types of hunting.  The first is the ‘stalk’ and the second is the ‘still hunt’ (Lynch 1993, p 65).  During a ‘stalk’, the polar bear picks up the scent of the seal and tactfully moves closer to the seal.  The seal may be at a breathing hole, in a snow lair, or it may have hauled itself out on the ice. The polar bear will slowly creep towards its prey, trying not to allow the seal to realize it is being hunted.

A ‘still hunt’ is when the polar bear has located an active breathing hole a seal is using.  The bear will lie in wait next to the hole for up to 50 minutes, waiting for that critical time when the seal pops its head out of the water for a breath of air.  At that moment, the polar bear lunges head first into the hole and grabs the seal (Lynch 1993, p 65).

Vocalizations: Polar bears vocalize as follows in response to their emotions:

Reproduction: A male polar bear’s territory generally overlaps the territories of several females – giving the male an opportunity to mate with more than one female.  There is intense competition among male polar bears, which often results in fighting among them.  Larger males have a greater chance of winning these battles and of mating.  Females generally breed once every 3 years (Stirling 1990, p 81)

Breeding Behavior: Females do not usually mate when cubs of the year or yearlings accompany them.  At 2 ½ years, lactation ceases and either the female separates from her cubs or an adult male frightens the cubs away as he begins to follow the female in hopes of mating.  Mating takes place on sea ice between April and May.  Once a male locates a female, they may be seen together for a week or more.  Mating is interspersed with periods of intense interaction and hunting for seals (Stirling 1990, p 82).  Females usually breed for the first time when they are 4 years of age (Stirling 1990, p 89).

Denning: After mating in spring, the female has only a few months to store away large deposits of fat before she needs to den in the fall.  She must gain up to 440 lbs of fat in order to have a successful pregnancy.  In spring and summer, the pregnant bear will feed upon ringed seal pups that have been recently weaned.  This super abundance of seals enables the female to accumulate fat quickly (Stirling 1990, p 83-84).

In late October the pregnant bear will come ashore and walk from snowbank to snowbank until she finds an appropriate place to build her den (Stirling 1990, p 85).  Dens are usually single chambers, slightly elevated from the entrance tunnel so warmer air remains with the female her and cubs.  The den is usually about 6 ½ feet by 5 feet in size, and approximately 3 feet in height (Stirling 1990, p 87).  Entrance tunnels are long and narrow – about 2 feet in diameter.  Some bears will occasionally dig a 2 or 3-room “complex” (Stirling 1990, p 87-88).

Litter Size: Two-thirds of all births result in twins.  Single cubs account for 20-30% of all births.  Triplets do occur but in most cases one of the cubs does not survive (Stirling 1990, p 88).

Cubs: Young are born in late November through early January weighing between 1 and 1-½ lbs.  Their eyes are closed at birth.  Male cubs are usually larger than the female cubs.  During the first 2 months, cubs have an unsteady walk.  After the age of 50 days, their canine teeth begin to grow in.  When the cubs emerge from the den they weigh about 25 – 30 lbs.  Before their final emergence from the den, the cubs leave the den for short periods of time.  During this time they begin to acclimate to the cold temperatures as they play, chase, roll around, fight, and slide in the snow.  Moms are quite attentive and groom and touch the cubs with their muzzle often (Stirling 1990, p 88).

Cubs learn from their mother by watching and copying her movements and behavior.  They watch everything she does and will also sniff the same places their mother has sniffed.  When the mother begins to stalk for food, the cubs will lie down and not move until she is finished her hunt.  They remain patient and well behaved.  Occasionally when a cub becomes “rowdy” the mother will cuff the cub, and vocalize.  The cub soon learns to remain silent and observe the mother’s movements.  Yearlings and 2-year-old cubs hunt approximately 4 – 7% of the time.  Mother bears spend 35% of their time hunting (Stirling 1990, p 120 and 125).

Enemies: Most bears have few natural enemies except for humans and the human impact on bear habitat.  An exception to this is threat walruses pose to polar bears.  Polar bears and adult walruses are rivals, occasionally coming into contact while feeding on whale carcasses or in the process of killing seals. On land, a polar bear has the edge over a walrus, but once in the water, the walrus has the edge. It can grab the polar bear from below, stab the bear with its tusks, and repeat this resulting in serious if not fatal injury to the bear (Brown 1993, p 108-109).