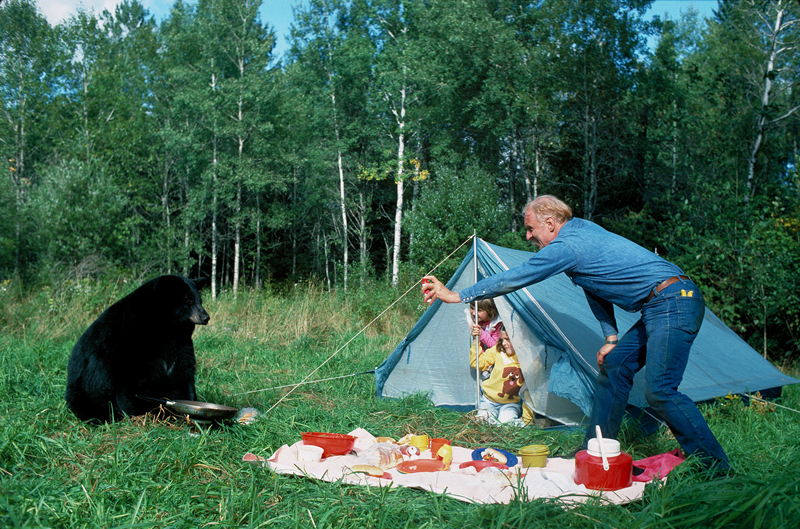 What is pepper spray and how does it work?

The active ingredient in pepper spray is capsaicin, which puts the “hot” in hot peppers. It comes in aerosol cans that propel the capsaicin solution in a stream or fine mist. It produces a generally harmless “burning” sensation that lasts a few minutes to an hour.

What is bear spray?

Bear spray (also known as Grizzly Bear Spray) is pepper spray approved by the EPA for bears, as is Counter Assault.

No. Ely researchers have never seen or heard of pepper spray causing anger or attacks.

Do I need a potent bear spray like Counter Assault in Minnesota?

Minnesota has only black bears. Unlike grizzly bear mothers that account for 80% of the deaths from grizzly bears, black bear mothers rarely defend cubs against people. When they do, they are not nearly as ferocious as mother grizzly bears. Nearly all close encounters with black bears involve bears seeking food. These bears are only mildly aggressive. The weaker types of pepper spray like Halt and Dog Shield have proven to be plenty potent against black bears seeking food. These products are not EPA-approved for bears, but Ely researchers believe anything more potent is overkill in black bear country.

About one black bear out of a million kills someone for food. These predatory attacks probably account for all 61 killings by black bears across North America in the last 108 years. Predatory black bears are not angry, defensive, or highly motivated to attack. They just want to eat you. The odds of meeting a predatory black bear are extremely low, but if you’d rather be safe than sorry, any of the three brands of pepper spray at the Bear Center (Counter Assault, Halt, or Dog Shield) should deter it from eating you as easily as these products deter black bears from eating other foods.

How do bears react to the potent EPA-approved bear sprays like Counter Assault?

Carl Ramm of Alaska said he was “astounded at how Counter Assault instantaneously stopped a charging mother bear and turned her away.” Gary Clutter of Montana said bear spray saved him from a dire situation. “I sprayed the charging mother grizzly bear full in the face when she was four feet away. It was like she hit a wall. She turned and ran so fast toward her cub she ran over it,” Clutter said. “Then, cub and sow were gone. This worked exactly the way it was designed to work. The bear didn’t die, and all I’m out is a can of bear pepper spray.”

Which products did Ely researchers test?

In the early 1980’s Ely researchers did the original close-up field tests of pepper spray on wild black and polar bears. They used Halt and Dog Shield, which have weaker concentrations of capsaicin and shorter spray distances than newer products like Counter Assault.

How does one use pepper spray?

Easy. With Counter Assault you spray the mist toward the bear’s head. With Halt or Dog Shield you direct the stream toward the eyes. Once a person sees how meekly black bears retreat from the mildest pepper spray, it gives a person confidence, despite what they may have read about bears being ferocious. However, it is not to be sprayed on a tent or backpack because it can induce a bear to roll on it. It is not allowed on airlines.

What brand to buy?

Counter Assault contains 2 percent capsaicin, the maximum allowed by law. The mist leaves the can at 70 miles per hour, travels up to 35 feet, and gets in a bear’s eyes, nose, mouth, and lungs for maximum effect. Experts consider it more effective than bullets against charging mother grizzly bears, which account for 80% of the deaths from grizzly bears. Many people who work in grizzly country have traded in their firearms for bear spray because it is easier to carry and aim in dense brush. Counter Assault is $49.50 for an 8.1 ounce can. Milder products like Halt and Dog Shield are not EPA-approved as bear spray, but these products have consistently worked on all the bears Ely researchers sprayed. It is kinder than the more potent brands. It is kinder than rocks. It is more effective than yelling or banging pots and pans. It shoots a stream 10-20 feet. Unlike the mist from Counter Assault, the stream from Halt or Dog Shield is less likely to blow back on the user. If it does, the weaker concentrations of capsaicin in Halt (0.35%) and Dog Shield (1%) cause less discomfort. The small 1.5-ounce cans are easily carried in a shirt pocket by an adult or child. Halt is $11.95, and Dog Shield is $12.95. (Updated 9-19-08)