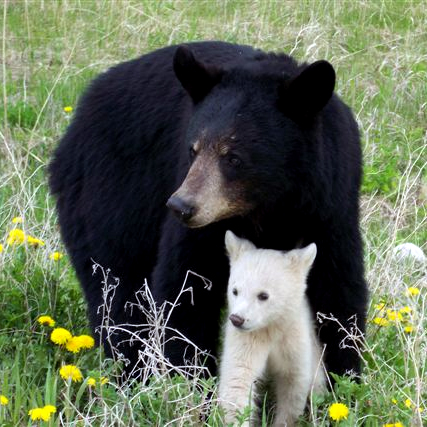 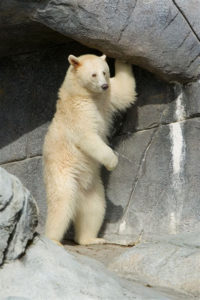 Maskwa, Cree for bear, is the name Manitoba wildlife officials gave to this rare white cub because of her significance to Native Americans.

These pictures have circulated on the Internet since 2004, usually with the claim they were taken near Gordon, Wisconsin.  The real location was a narrow strip of land between Lake Winnipegosis and Cedar Lake in Manitoba. 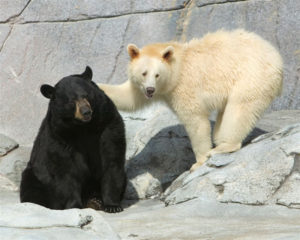 In June 2004, word spread that this mother and female cub could be seen along the highway.  People flocked to see, feed, and photograph them.  The mother was killed by a car on July 11, and little Maskwa was placed in Winnipeg’s Assiniboine Park Zoo.  She weighed 35 pounds—big for her age—probably because of the extra food she and her mother got from people.  She weighed 77 pounds by fall.

Over the years, she developed honey-colored fur on her neck and head as often occurs in white black bears.

Tests showed Maskwa to be genetically different from Kermode bears and from other white black bears. Her whiteness is due to a new mutation on the same gene that causes whiteness in Kermode bears-not as a result of gene flow from British Columbia 1,000 miles away.