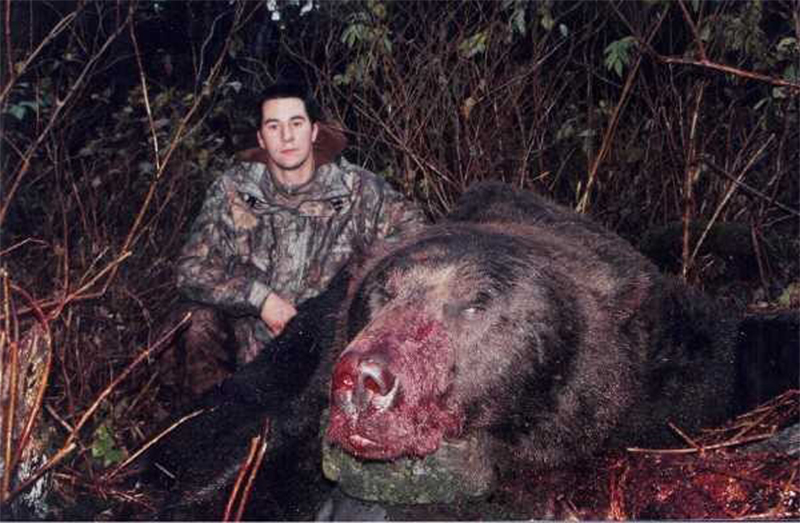 Over the past few weeks, several well-meaning readers sent me an e-mail with a story and photos, supposedly of a new world record grizzly bear killed in Alaska.

According to the internet story, a forest-service worker was deer hunting when a huge bear charged him from 10 yards away. The man emptied his semi-automatic 7mm magnum rifle into the bear, killing it in the nick of time. It dropped dead just a few feet from him.

It was reportedly 12 feet, 6 inches — at the shoulder, no less — and weighed at least 1,600 pounds. A new world record, the story said. Standing, it supposedly could look inside the gutters of an average, single-story home, without using a step ladder.

This blood-thirsty monster allegedly was responsible for killing several people, and one of them was found, half-eaten in the bear’s den, not far from where it charged the hunter. A gruesome photo, supposedly of the alleged victim, was included. Wow! A man-eating, world-record bear, charging a hunter and dropping dead just a few feet from him. “This story is huge,” thought I. “It’s stupendous. It’s colossal. This is front page stuff.”

I called Alaska to confirm the information. “You wouldn’t believe the number of calls we’ve received about that story,” said Willow Gaber of the Alaska Dept. of Fish and Game.

According to Gaber and department records, the bear was shot Oct. 15, 2001, on Hinchenbrook Island at the mouth of Prince William Sound, by 22-year-old airman Ted Winnen from Eilson Air Force Base.

Winnen was deer hunting, but bear season was also open. He and a friend spotted the bear fishing along a river about 40 yards away. They decided it was a shooter, but the bear disappeared in the underbrush. It had not seen or smelled the hunters. It reappeared about 10 yards away. Winnen shot it through the head with a .338 Winchester Magnum (not a 7 mm mag.) and bowled it over. He then emptied the rifle into its vital area to make sure it was dead. It did not charge the hunter(s) as was claimed.

Official records showed that the bear was an Alaskan brown bear and measured 10 feet, 6 inches from head to toe and weighed an estimated 1,000-1,200 pounds. It was a nice, trophy brown bear, but it wasn’t 12½ feet at the shoulder and didn’t weigh 1,600 pounds. Nor was it even close to breaking the world record.

“It’s amazing how stories can change once they circulate around the Internet,” said Gaber.

So that clears up the bogus “world-record bear charges hunter at point-blank range” story, but was the bear the man-eater it was accused of being?

“That bear wasn’t responsible for killing any humans,” said another spokesperson for the Fish and Game Dept., who only gave her first name as Martha.

But what about the gory photo of the half-eaten victim? It had to be real. It was on the internet.

“Digital photography is just wonderful, isn’t it,” said Martha. “You can pretty much use your imagination to create any photo you want. I’ve seen the photo of the alleged bear-attack victim, and it showed no sign of having been attacked or eaten by a bear.”

The true world-record Alaskan brown bear still stands, exhibited in a glass case at the Anchorage Airport. Martha said it was taken in the 1960’s and weighed around 1,700 pounds.