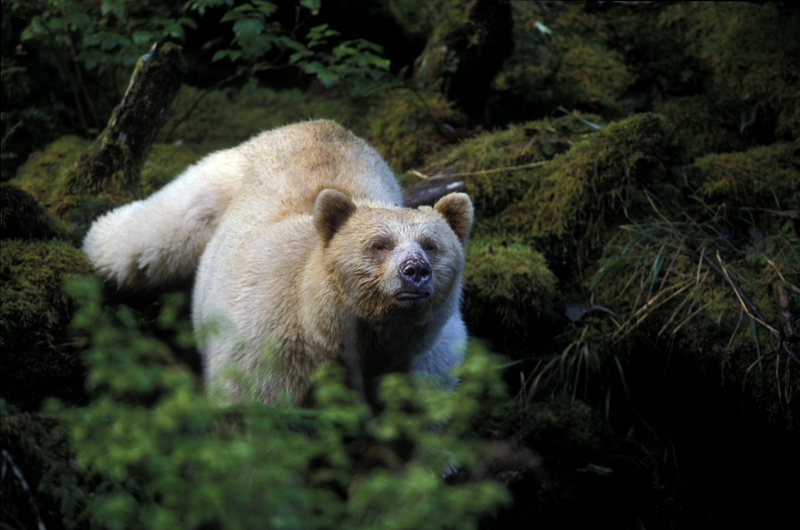 How Did White Fur Become Established?

How did white fur become established among the black bears of Princess Royal and Gribbell Islands?

No one really knows, but the thinking, in general, goes like this.  Mutations frequently occur.  Some of them reduce reproductive success and eventually die out.  Others increase reproductive success, making those genes ever more common in future generations—survival of the fittest.

Along the Pacific coast, white fur might make fishing easier.  Black bears along coastal salmon streams differ from interior bears in that salmon are a major part of their diet in spawning seasons.  Dr. Tom Reimchin and his graduate students at the University of Victoria suggested that being white might help Spirit Bears catch salmon under the cloudy rainforest skies of the Pacific Coast.  Overcast skies appear white from underwater, so a white body might seem less threatening to the salmon.  To test this, they put on white clothing or black clothing and waded into salmon streams.  The salmon initially fled, but when the researchers stood still, the salmon regrouped more quickly around researchers wearing white.  For white bears, better fishing success might enable them to maintain the genotype by growing more rapidly and reproducing more successfully.

Then, why aren’t all black bears along the Pacific Coast white?

To maintain a genotype, two conditions must be met.  The genotype must confer a reproductive advantage, and the population must be protected from gene flow from surrounding areas where other genotypes are favored.  Those conditions appear to be met to some extent on Princess Royal and Gribbell Islands.  Salmon are an important food there, and the bear population is somewhat separated from other bear populations by water and the steep Coast Mountains.  Those barriers prevent the adaptive white genes from being swamped by dominant black genes from mainland populations.  Other populations up and down the rainforest coast are not as well separated from interior populations where black fur is advantageous, so gene flow from the interior populations swamps the double recessive white genes and prevents their expression.

Beyond British Columbia, white black bears are extremely rare.  In dense forest, black fur is advantageous because it contains melanin, which makes the fur more resistant to abrasion from understory vegetation.  The ability to blend into dark shadows may also confer an advantage, or may have done so in the past when Ice Age predators threatened black bears.