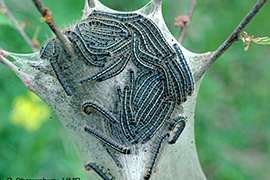 In outbreak years, caterpillars usually hatch in May, defoliate huge areas, and pupate 5-6 weeks later in June or early July.  As the caterpillars grow, they increase their percent fat content.  At the same time, though, they develop stiff hairs and calcium oxalate crystals that clog digestive tracts and make them unpalatable to most animals and birds.  The only northland bird that regularly eats large tent caterpillars is the black-billed cuckoo, which can periodically slough the lining of its stomach to get rid of accumulated hairs and crystals.

No one knows how bears deal with the hairs and crystals, but in northeastern Minnesota, when the caterpillars become large enough to make a meal, bears somehow make them their main food.  24-hour observations showed that Terri ate them most of each day, bedded down when it became too dark to easily find them, and resumed her hunt at first light in the morning.

This video, taken June 22, 1990, shows Terri, a 146-pound wild adult female, taking advantage of a major outbreak of forest tent caterpillars (Malacosoma disstria).  These “army worms,” as they are locally called, were her main food for the month of June that year.  The fact that bears eat them was unknown before Terri revealed it.

Terri also revealed that the skins come through bears intact, making it possible to count how many caterpillars are eaten per day.  To do that, a researcher accompanied Terri for three 24-hour periods as the caterpillars grew to over a half-gram apiece. 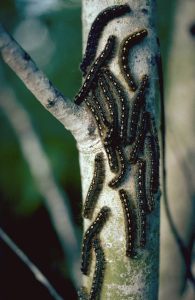 Although tent caterpillars provide food for bears in spring, they reduce food in summer.  By defoliating berry bushes in June, they reduce berry production in July and August.  The study bears did not grow and reproduce any better in years of tent caterpillar outbreaks than in other years.