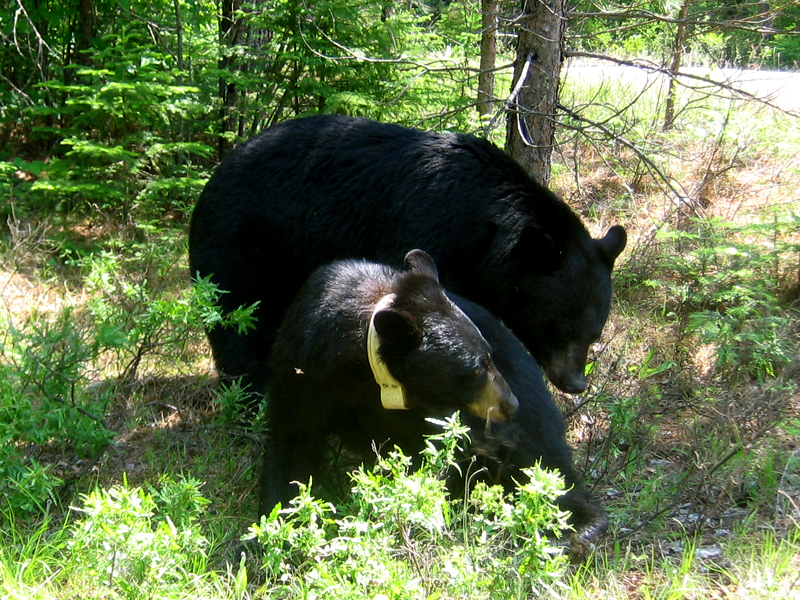 Black bears in northeastern Minnesota mate between mid May and late June. Males have mating ranges 10-15 miles in diameter. Each mating range contains 7-15 female territories. Some territories contain both mothers and daughters of breeding age. Some of the females are accompanied by cubs and are not be available to mate until the next year. Males avoid those territories. Females accompanied by yearlings separate from them as they undergo hormone changes and become ready to mate.

Extra-territorial Travels by Estrous Females
Once breakup has occurred, females traverse their territory at 3 times their normal rate laying down a scent trail. Females also may make excursions outside their territory. This serves to advertise their status, draw in potential mates, re-establish their territorial rights, and allows them to determine the availability of surrounding territory. Males follow her scent trail.

Both males and females increase their movements during mating season. Females continue to forage during this time and generally can maintain their weight. However, males forage very little during mating season and lose approximately 20% of their fall weight during the 7-8 weeks of mating season. This loss is on top of the 20% of fall weight lost over-winter. This means a mature male weighing 500 lbs in the fall would leave the den in early spring weighing 400 lbs and would weight 300 lbs at the end of mating season—and regain those 200 lbs in 3 months to weigh 500 lbs by fall.

Males follow females to assess their receptiveness, regularly sniffing areas where the female has sat and the female herself when possible. Couples often play and rest together during courtship. Males may follow individual females and guard them against rivals for up to 9 days before the female becomes receptive and mating occurs. Soon after mating, the male moves on to find another mate. Both sexes are promiscuous. 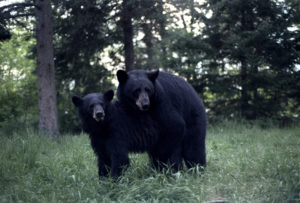 Mating Observation
Wildlife Research Institute researchers were surprised to find Pete and Juliet together. Young Pete seemed too small to be mating with his older Aunt Juliet, and he was lucky not to have been run off by a larger male. Pete (2) is two years younger and 12 pounds lighter (at 148 pounds) than Juliet, his mother June’s half-sister. Both are daughters of Shadow, the 17-year-old matriarch of the clan in the Eagles Nest Township area.

Here is what led up to the mating—and what followed.

On May 31, Juliet separated from her male yearlings Luke and Skywalker in preparation for mating. The yearlings, on their own for the first time and weighing 51 and 61 pounds, spent much of the next several days up trees.

On June 3 at 7:20 PM, researchers saw Juliet with Pete near one of those trees. Yearling Luke came down and approached Juliet making plaintive sounds that showed he wanted contact. She scrambled after him and ran him back up the tree. She shortly moved on with Pete close behind.

Researchers realized they had an unusual opportunity to videotape a male-female pair. Both bears had been studied for years and had learned to ignore researchers.

The next afternoon (June 4), a researcher homed in on Juliet’s radio signal and found her four miles outside her territory still accompanied by Pete. Females lay down miles of scent trail outside their territories during estrus, and Juliet was passing through Pete’s mother’s territory at the time. The pair foraged on ant pupae for a few minutes. Pete tried three times to mount Juliet. At 2:54 PM, he remained mounted until 3:55 PM. During the final 21 minutes, Pete made fluttering thrusts that researchers believe indicate intromission and ejaculation.

Black bear females are thought to be induced ovulators. Consistent with that, black bears copulate for long periods, and the male has a penis bone called a baculum. Copulation is vigorous and apparently exhausting for the male, which helps explain the 20 percent weight loss mature males undergo during late May and June.

For 20 minutes after the copulation, Pete made intense tongue-clicking vocalizations and prevented Juliet from leaving, perhaps to give his sperm time to fertilize her eggs before she met another male. At the end of the video (4:15 PM), Juliet moved off toward her territory, moving too quickly for the researcher to follow.

Sometime in the next 3¼ hours, Juliet separated from Pete. Juliet was alone when she crossed a road at 8:30 PM that evening. In the next 51 minutes, she moved another 1.1 miles toward her territory. Then the researchers got their vehicle stuck and couldn’t follow her movements.

The next day (June 5), Juliet was in her territory at 7:08 AM and 5:17 PM but she was in inaccessible areas, so researchers could not determine if she had attracted another male.

The next evening (June 6), Juliet was five miles outside her territory again. She encountered Pete, but he was busy following his 8-year-old Aunt RC—another of Shadow’s daughters. RC had separated from her yearlings only three days earlier and was attracting males. BB King, a 10-year-old male who had been following RC for a day, intervened. He and RC moved on with Pete following at a distance. Fourteen minutes later (at 8:37 PM), Juliet put her nose to the ground and disappeared after the three.

The next morning (June 7), Juliet was less than a mile away resting alone, perhaps recovering from mating activities now completed. When she arose after 5 PM, she headed back toward her territory. Pete was seen still following BB King and RC.

Much remains to be learned about the extent to which females select mates. Females have favorite males. Some females nuzzle and lightly bite their mates two months after mating season is over. Although black bears lead solitary lives because of their food requirements, they remember each other and seek out favorite bears from time to time. Although their lives are ruled by fear and food, there remains a part of them that desires contact with their fellow creatures.