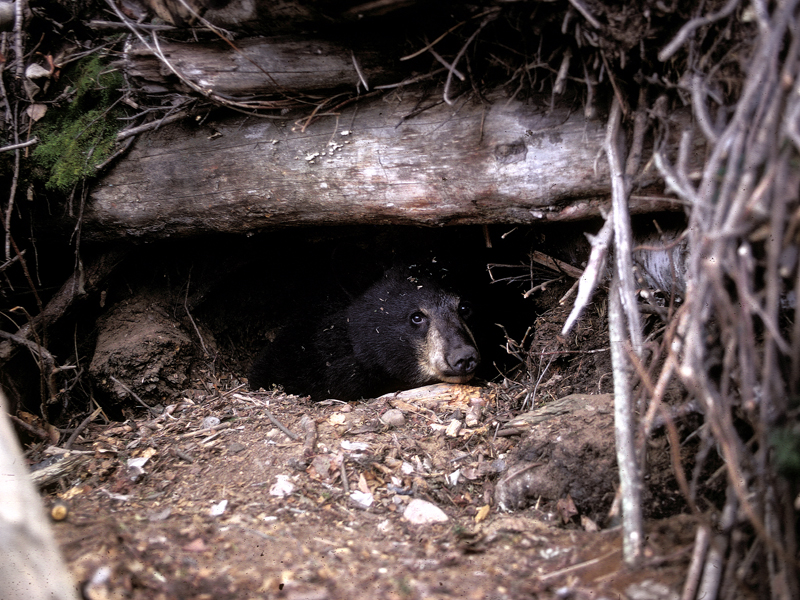 Bears den in a variety of places.  If you suspect something is a den, look for a bed of leaves, although not all bears make beds if they den after snow has fallen.  To be sure a bear used a leafy bed, look for a depression 2-4 feet in diameter.  Dampen your hand on the forest floor and rub it around on the leaves to see if any dark hair sticks to it. 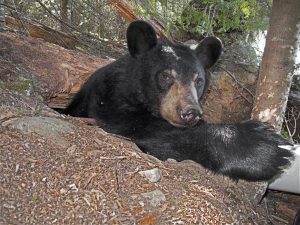 Bear at her den

Bears investigate possible den sites throughout the summer. If a bear is disturbed during the winter, it will often move directly to another den.

Standing hollow trees are favorite denning spots, but few trees are allowed to reach the mature stage at which the center rots and becomes hollow.  Such trees can be found in portions of the Boundary Waters Canoe Area in northeastern Minnesota, especially where they were fire-scarred a half century or more ago.

Rock crevices and caves are also used as dens, and these can remain useable for centuries, but usually not by the same bear and usually not in successive years.  The den that researchers found being used the most during four decades of study was used three times, each time by a different bear, and each time after an interval of six years.

Dens are also dug into hillsides or under the root system of a tree.  These dens may be dug during the summer months, long before they are needed.  Dug dens often collapse after use and therefore are seldom reused.

Bears also may den under the crown of downed trees or in brush piles.

Some bears just rake up a bed on the ground near a windbreak.