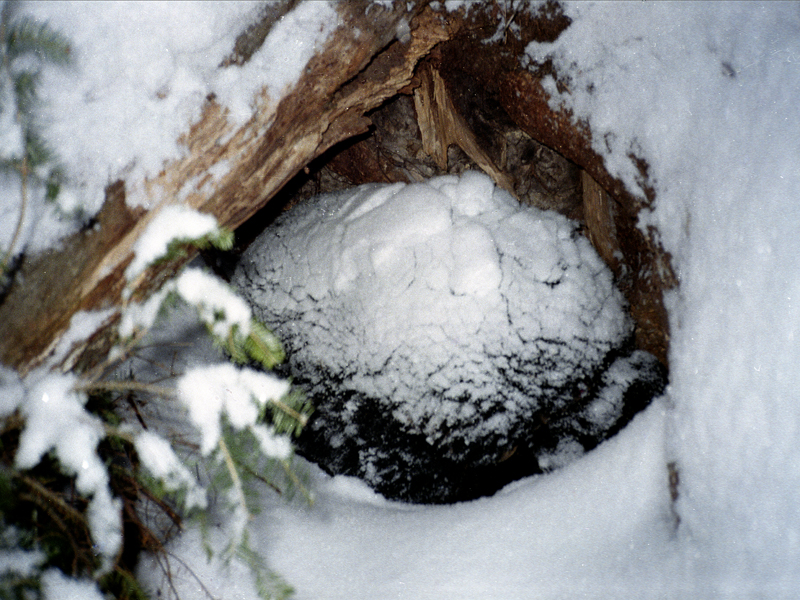 Will Snow Accumulate on a Black Bear’s Back?

Yes, snow accumulates on black bears at ambient temperatures below approximately 19 degrees Fahrenheit.  The photo shows a 3-year-old female black bear in an open den.  The temperature is 9 F (-13C).  The last time it snowed was 6 days earlier.  Her head is to the right, tucked under her chest to breathe on cubs that were born in mid-January.  The bear knows and trusts the photographers and continued her care of the cubs for the picture.

Black bears have two kinds of fur on their back—visible guard hairs about 3 inches long and, in winter, a hidden layer of fine underfur so dense that water can scarcely penetrate it.  The underfur is so insulative that bears in the open become covered with snow when ambient temperatures are colder than about 18 F (-8 C).  The exact temperature at which snow accumulates varies with individuals.  Some bears have longer, denser fur than others.  Body temperature also varies from one bear to the next.  During hibernation, fat bears usually maintain body temperatures between 95 and 99 F, while skinny bears reduce body temperatures to as low as 88 to ration fat.