What If I Corner a Black Bear? 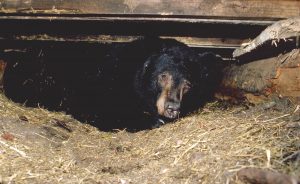 Bear Center researchers wonder where the worry about cornering a black bear comes from.  It is next to impossible to corner a bear in the woods.  When researchers have tried to corner bears to force them up trees for capture, none attacked.  Some nearly bowled over researchers as they escaped, but none paused to bite.  All just wanted to escape.  It’s been the same when researchers cornered bears in dens — including mothers with cubs.  The bears sometimes were blustery, showing they were nervous, but they didn’t come out and attack.  The few that came out simply ran away.

But what if a bear is cornered in a house or garage?  The best course is to open a door or window and let the bear out.  But no matter what people do, most bears leave without incident — with rare exceptions.   Probably the most famous exception is the incident with Kim Heil-Smith of Grand Marais, Minnesota.

Woman Fends Off Bear Attack in Her Own Garage

DULUTH, Minn. — Kim Heil-Smith walked into her garage outside Grand Marais, Minn., one night last week expecting to pull something out of her car.  Instead, she ended up wrestling a large black bear.

Heil-Smith, who was talking on a cordless phone at the time, opened the door from her home’s entryway into the attached garage about 9:30 p.m. and found herself face-to-face with a sow and her cub.

“I opened the door and she was right there, between the car and the side of the house. She didn’t have anywhere to go, so she came at me,” said Heil-Smith, who lives on Devil Track Lake Road north of town.  “I tried to shut the door on her, but she was too strong. She wrapped her arms around me and I fell back.”

Heil-Smith, 37, who was home alone at the time of the attack, was amazingly calm and upbeat when describing the ordeal.  “I was pretty scared at first, I wasn’t thinking. Then I just got mad at this bear being in my house. I finally was able to get my knee up so she couldn’t bite me, and then I grabbed her nose and yelled, ‘Get out of my house!'” she said. “I think that must have startled her because that’s when she left.”

She’s also amazingly forgiving toward the bear.  “I don’t blame her, really; she was just protecting her baby. I don’t think she did it maliciously,” Heil-Smith said.

Heil-Smith had been on the phone at the time with her friend, Debby Nelson. The phone was knocked out of her hand during the attack. But instead of yelling for help, Heil-Smith was yelling, “It’s only a bear” to avoid scaring her friend.  “I didn’t want her to think it was a man with a gun or anything,” Heil-Smith joked.

“She’s pretty tough,” Scott Smith said of his wife. “It was one mother against another. I wasn’t here when it happened, but I could see the results when I got home.”  After the bear left with its cub, Heil-Smith found the phone and dialed 911. When paramedics arrived, they found her cleaning blood off the floor. “I didn’t want my daughter to come home from volleyball and see all that blood,” she said. “So they helped me clean it up as they were fixing me up.”

A life-long resident of the Grand Marais, Minn., area, Heil-Smith said she’s not really afraid of the many bears in the area. But she may check her garage closer next time she heads out.  “I usually close the garage door to keep them out of the garbage and the sunflower seeds. But I was going out again that night and I didn’t close it this time,” she said. “The bear was just helping her cub find food and I got in her way.”

Dave Ingebrigtsen, assistant Department of Natural Resources wildlife manager in Grand Marais, said this attack sounds “more like a cornered animal than a problem bear.”  There have been very few nuisance calls in the area and no reports of troublemaking bears.  “It doesn’t sound to me like an animal we’d have to track down,” he said.  Dave Garshelis, a DNR bear expert, agrees.

“Generally with black bears, there’s no indication that females with cubs are more dangerous than a single bear. That comes from grizzly bears,” Garshelis said. “Black bears generally aren’t aggressive. But when any animal feels cornered, they’ll sometimes act. Not very often, but it can happen.”