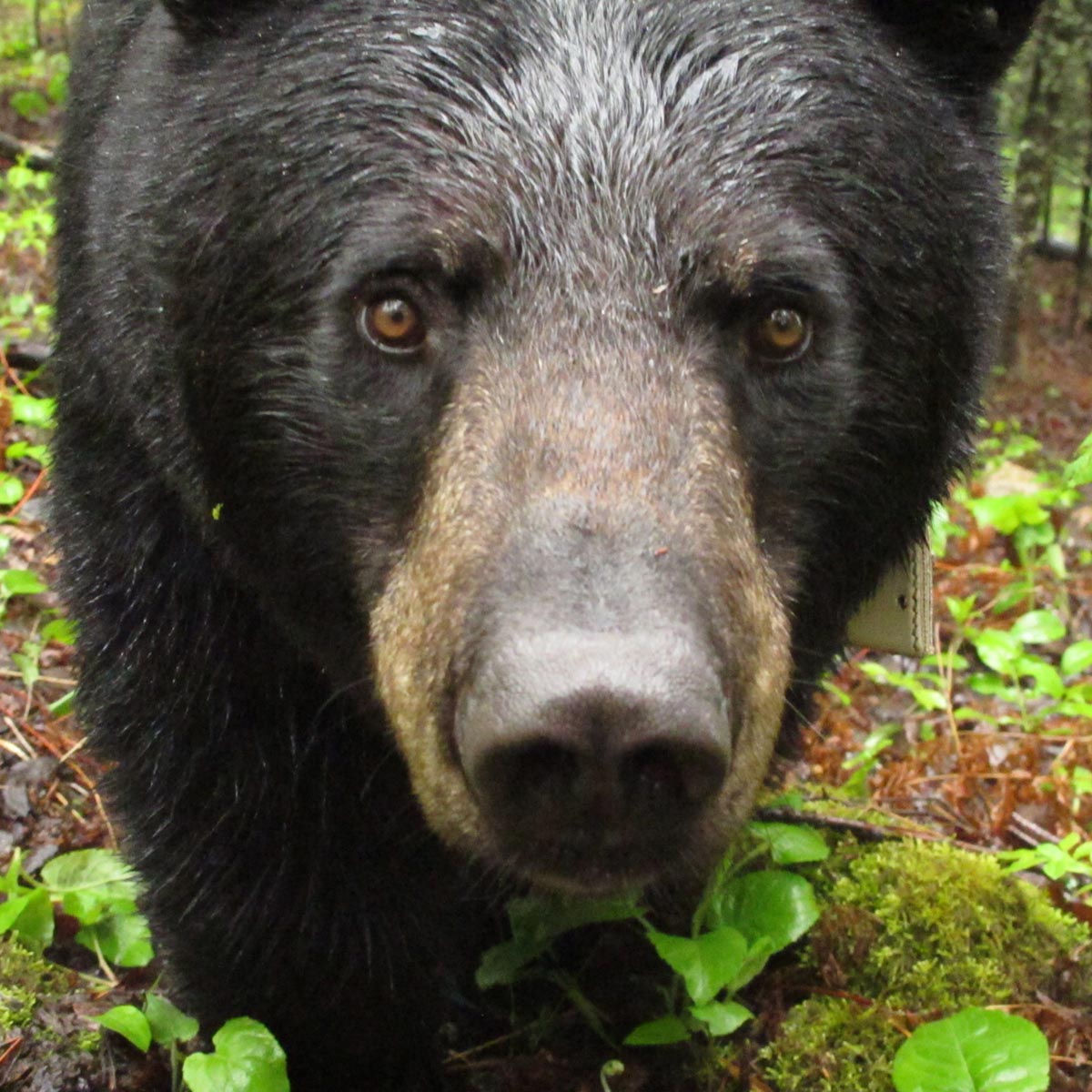 Black bears use sounds, body language, and scent-marking to express their emotions of the moment.

The main thing that helped me get over my fear of bears was learning their language—learning to interpret bear bluster in terms of their fear rather than my fear—learning that behaviors I thought were threatening were really expressions of their own apprehension.     – Lynn L. Rogers, Ph.D., 2007

Amiable sounds are grunts and tongue clicks used by mothers concerned for their cubs and by bears approaching other bears to mate or play.  Cubs make a motor-like pulsing hum when they nurse or are especially comfortable.

This mother black bear is moving her 3-month-old cubs from their den to a white pine tree to begin life outside the natal den. The mother is grunting her concern while the cubs are voicing little squeals of mild distress.

Black bear cubs make motor-like pleasure sounds as they nurse. Similar to a cat’s purring, bears make this pleasure sound when they are especially comfortable, nursing, or eating a special treat. Adults make this sound with a deeper voice.

The sounds of a young cub with its mother.  The cub is making the cooing sounds and the mother grunts, which is a common sound mothers make to cubs.

Apprehensive expressions are forceful expulsions of air accompanied by threatening body language and sometimes deeper throaty sounds.  This explosive behavior looks and sounds very threatening but is harmless bluster from nervous bears—often mothers with cubs.  Bear Center researchers have never had blustery bears approach and make contact. Out of respect, researchers avoid crowding these apprehensive bears, but they have found them easy to chase away.

Bears blow and clack their teeth with they are afraid. When this is done in response to being startled by a person, it appears to be a defensive threat, but they also do it when they scare themselves by almost falling from a tree.

High emotion.  Black bears use a human-like voice to express pleasure, pain, high anxiety, and fear.   The most intense sounds are heard in the mating battle video below.

This is a distress sound made by a fearful cub. This sound is commonly made when a cub is separated from its mother. This recording was made while a researcher examined a cub out in the field. The cub was soon released back to the mother.

When bears are very scared and in a subordinate role they moan. This bear was in a barrel-trap, which is a form of live trap. They also moan when they have escaped up trees or are being threatened by a nearby dominant bear.

A female bear is threatening a male that is competing for her food. The main sound is the pulsing threat. A higher pitched moan of fear is heard briefly from the subordinate male.