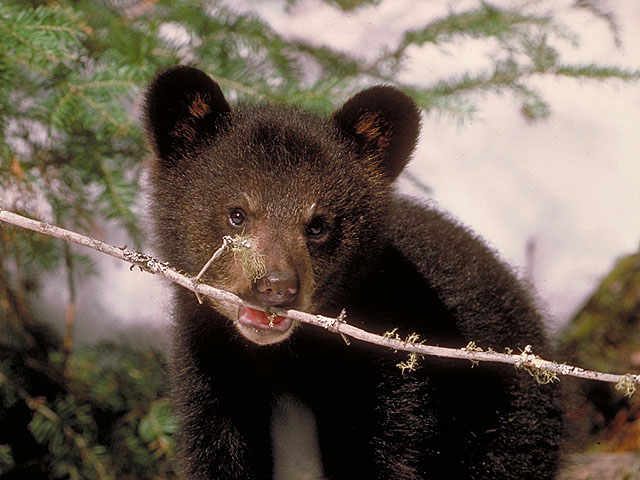 Early May  Only patches of snow remain.  Greenup begins.  Cubs’ legs are long enough to follow mother.  Mother leads them to feeding areas where she takes advantage of nutrient-rich spring vegetation.  Cubs sometimes mouth the foods, but they are still unable to digest solid foods.

Late May and June  Cubs’ teeth have erupted enough for chewing and ant pupae are some of their first foods.  Although they are beginning to eat solid food, they still get much of their nourishment from their mother’s milk. (see video below)

Summer  Cubs accompany mother to feeding areas within her territory, although many times the cubs are running ahead of the mother.  Well-fed cubs spend a lot of time playing with each other, with mom, and with objects.  All are alert to danger, but mom is the most vigilant.  She vocalizes her emotions about situations, and the cubs respond.  The cubs will climb trees if the mother expresses danger or if the cubs sense danger on their own.  We have not seen mothers spanking cubs or giving specific vocalizations to send them up trees.  When she grunts to them and seems to want them to come down and leave the area, the cubs may or may not respond.  The mother may be aggressive toward danger or retreat from it and lead the cubs to an escape tree.  She defends her territory against other females, maintaining a more or less exclusive feeding area for herself and her cubs, although male ranges may overlap her territory.  Some females lead cubs to feeding areas up to 60 miles outside their territory in late summer, and the cubs remember these areas and may return to them as adults.

As cubs increase their intake of solid foods they nurse less frequently, but nursing continues throughout the summer if mother is well-fed and can produce milk.

Fall  Sometime between mid September and early November, families become lethargic, construct a den, and settle into it for the winter.  Although some dens may be dug during the summer, final den preparations are done in the fall.  If the den is a burrow, the mother does the main digging and rakes in most of the leaf litter for bedding, but the cubs participate as well.  Cubs of well-fed mothers may continue to nurse right up to within days of denning, usually in October.

Late fall and winter  In the den, mothers share their warmth with the cubs, snuggling together to reduce the surface to mass ratio and conserve heat.  The cub’s permanent teeth erupt during fall, winter, or spring, depending upon their overall stage of development which depends upon food.  In January the cubs officially become ‘yearlings.’

Spring  The family emerges in April and will remain together for another month or two until the mother is ready to mate again.  The growing yearlings still need a lot of deep sleep, and they depend upon mother to remain vigilant while the yearlings fall into deep REM sleep.