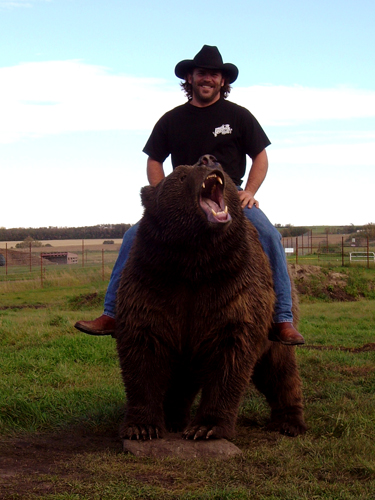 Ruth LaBarge has owned and trained bears for the entertainment industry for over thirty years.  She has the largest selection of working Kodiak bears and black bears in North America.  They are seen in many feature films, TV programs, and commercials.  Her animal actors also appear in TV nature programs like Wild America, Nature, and National Geographic’s “Grizzly.”

The video demonstrates the trained behaviors of 5 of her bears.  Some of the bears were trained for years to perform specific behaviors for upcoming movie scripts.  One such behavior is opening the mouth to look ferocious.  That behavior has been used for many movies, book covers, and magazine covers.

The tame bears that are photographed for the open-mouth book and magazine covers look less ferocious with their trainers.  These gentle bears were trained since birth to open their mouths for food.  Bears do not snarl like cats and dogs.  The book and magazine covers show a trained behavior that sells because it fits the stereotype the public has been led to expect from bears.