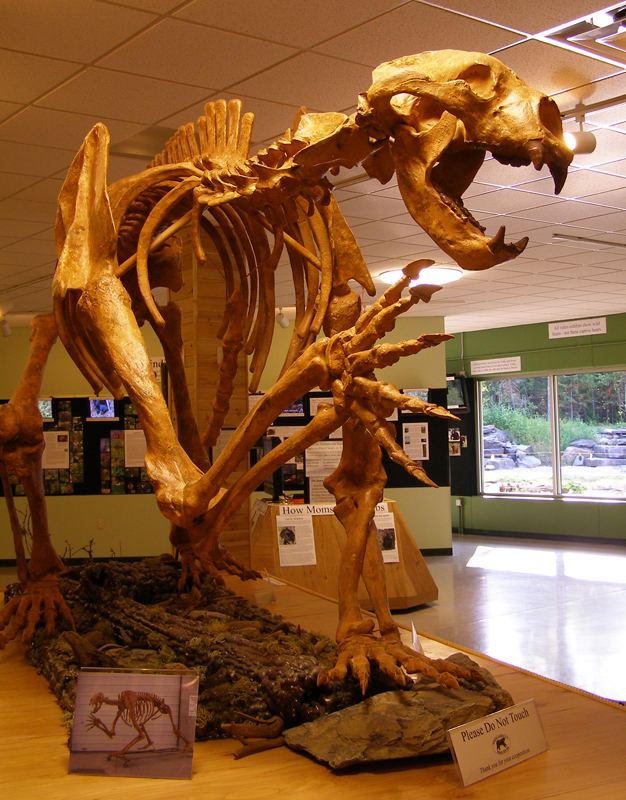 The Fastest Running Bear That Ever Lived

Also called the bulldog bear, the giant short-faced bear (Arctodus simus) was undoubtedly the fastest running bear that ever lived. Rangier and longer legged than any bear today, it was about five feet at the shoulders when walking and stood as tall as 12 feet on its hind legs. Unlike pigeon-toed modern bears, its toes pointed straight forward, enabling it to walk with a fast, purposeful gait. It probably could run over 40 miles per hour despite weighing over 1500 pounds.

Its skull and shearing type of teeth indicate a highly carnivorous way of life. Its eye sockets are set wide apart and face forward, giving it excellent vision. Its short, broad snout had a huge nasal passage, which probably means it had a keen sense of smell and could inhale great volumes of oxygen while pursuing prey. The large width of the jaws in relation to their shortness, plus the huge insertions for biting muscles, gave this bear a vise-like killing bite and the ability to crush bones to obtain marrow. Tests of bone samples show a very high ratio of nitrogen-15 to nitrogen-14, a nitrogen “signature” that indicates a true carnivore. Everything considered, paleobiologists conclude that the giant short-faced bear ate only meat.

Giant short-faced bears lived in Minnesota and the open country west of the Mississippi River and north to Yukon and Alaska. They probably scavenged and preyed upon large herbivores such as bison, muskoxen, deer, caribou, horses, and ground sloths. Their disappearance is linked to changes in habitat that led to the disappearance of some of these large herbivores at the end of the Ice Age.

A close relative, the lesser short-faced bear (Arctodus pristinus) lived near the Atlantic coast and in Mexico. This smaller bear with its longer face and smaller teeth may have been more omnivorous. It may have died out due to competition with a large Pleistocene subspecies of black bear (Ursus americanus amplidens) and due to brown/grizzly bears (Ursus arctos) invading from the west near the end of the Ice Age.

The only living relative of the short-faced bears is the spectacled bear (Tremarctos ornatus) of South America. It is omnivorous and the size of a black bear.