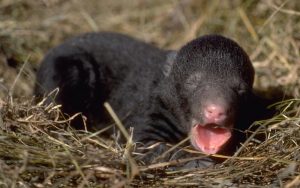 On August 7, 1990, a scared cub sounded so much like a person yelling “Help” that people ran into the woods to help.

On July 4, 1970, a mother black bear woke up from being tranquilized and began searching for her cubs. A 3-week-old baby cried. The bear approached within a few feet, saw what it was, and went on to find her cubs up a tree.

On March 15, 2003, five people, including a newborn baby, were outside a den containing a mother black bear and two cubs. When the baby cried, the bear leaped to within two feet of it and then looked back at her cubs. The look of concern left her face and she settled back into the den with her cubs.

On July 24, 2004, a baby cried in a house. Outside, a mother bear stood up and pressed her face and paws against a picture window four feet away until the baby stopped crying. The mother bear and cubs walked off into the darkness.

And here is an example of a baby crying