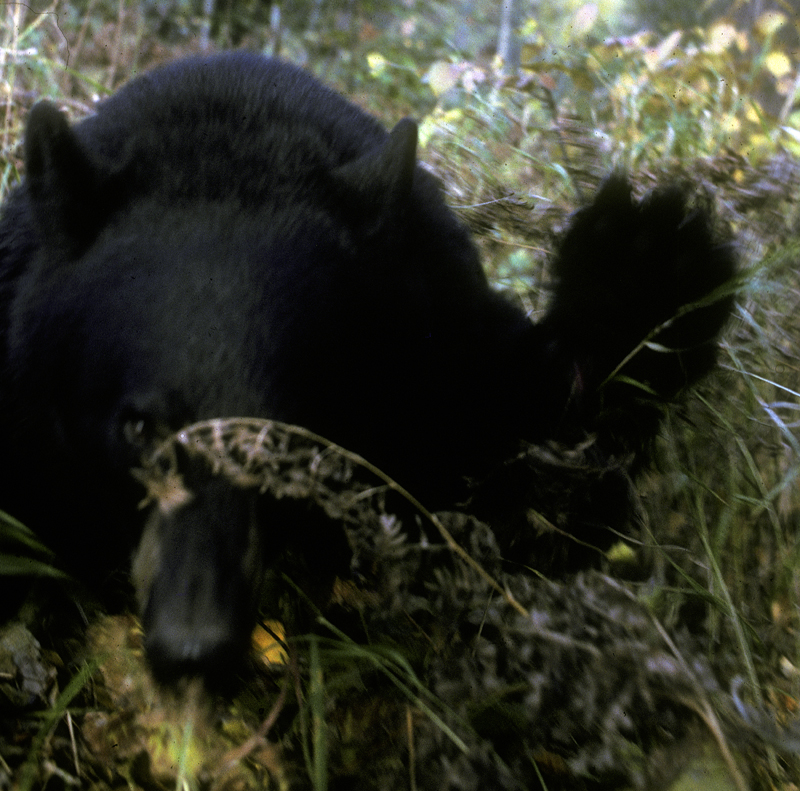 Outdoor magazine artists typically depict bears as startled, angry, charging, or attacking.  All typically are shown with their lips drawn back in some unnatural expression of supposed anger.  The same is true for bears depicted as entering tents and houses.

Hunters, researchers, and rural homeowners who have encountered hundreds of real bears laugh at the unreality.  Bears are not like cats and dogs that bare their teeth when they feel defensive.  Bears typically run away, climb for safety, or show harmless bluster with no effort to show their teeth.  Instead of baring their teeth, black bears signal that they are uneasy by making the muzzle long and narrow.

Sometimes they exhibit harmless bluster like this bear is doing (photo).  It is lunging and slamming its front feet down while blowing explosively.  Its muzzle is long and narrow, showing it is upset, but it is making no effort to show its teeth.  This wild bear was part of a study to learn the meanings of black bear vocalizations and body language and to learn whether blustery behavior was a prelude to an attack or simply an expression of nervousness by the bear.  The study showed conclusively that blustery behavior is not a prelude to attack or a sign of aggressiveness.  It simply means the bear is nervous.