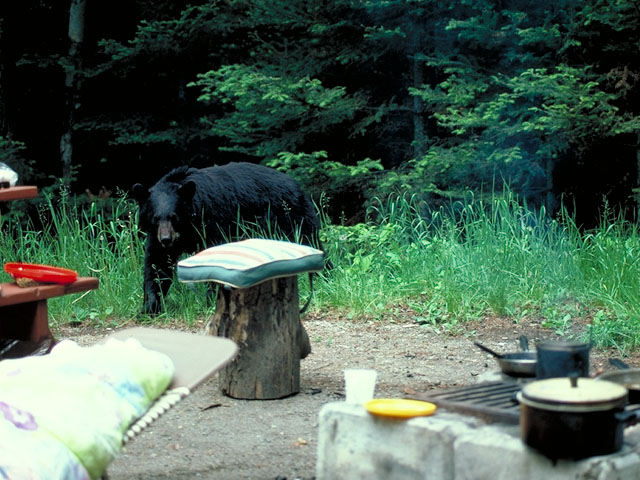 How to Shoo a Black Bear? 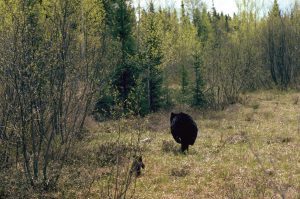 Bears that are used to people may be harder to chase away.  Most people hang back.  Some enjoy watching.  Others bang pans, which bears get used to.  Generally when people get close the bear runs away.  Bears assess people’s behavior like they assess other bears.  Their lives are ruled by fear and food.

Bear Center researchers have never seen a bear they couldn’t chase away, although some required extra effort.  Sylvia Dolson, the Executive Director of Get Bear Smart Society in British Columbia has chased hundreds of bears.  She says mothers with cubs have occasionally rushed toward her before retreating, but she has never had a bear come after her and hurt her.  Bears are not like territorial dogs and are not like the drawings on magazine covers that portray them as instantly angry at the sight of a human.

It is probably overkill to do more to make these basically timid animals run away, but people can look more ferocious by yelling and stomping and waving their arms while moving toward a black bear.  Waving a big black plastic garbage bag adds to the picture.  A group is even better.  Pepper spray, of course, is hard to beat.  Lynda Smith uses a super-soaker squirt gun (range 35 feet) filled only with water so as not to injure eyes.  An Ely, Minnesota game warden uses a slingshot with small stones to sting the back ends of bears.

In Yosemite National Park, biologist Jeff Keay chased black bears out of campsites by approaching aggressively and throwing stones.  He recommended campers do the same, cautioning it might take extra effort to chase bears in possession of food.  He found that the more aggressive campers were, the more timid the bears became and the more readily the bears ran the next time.

In Mammoth Lakes, California, expert Steve Searles uses pyrotechnic devices to demonstrate aversive conditioning techniques on TV but says all he needs is his voice and aggressive demeanor to chase any bear.

Bears fear what they don’t understand.  Black bears have run from ducks waddling into view, a monarch butterfly landing on a bear’s back, aggressive house cats, and yapping little dogs.   Responses to danger can vary with personality, hunger, reproductive status, and experience.