How to Age a Bear

The most accurate way to tell the age of a bear is to count the rings in a cross section of a tooth root using a microscope.

This cross-section is from a 16-year-old mother black bear killed by wolves in February 1977.

Here’s how it works:

The outer part of the root, called cementum, adds a new layer each year.  The new layer has two parts: a narrow dark line that forms during hibernation and a light area that forms during the growing season.  Black bears are born in January, so the dark lines mark birthdays.  When this bear was killed in February, she was still adding the dark line for her 16th birthday to the outer edge of her tooth. 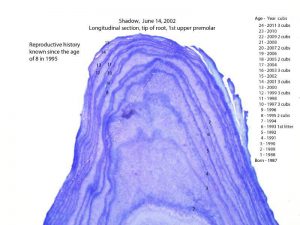 Cross section of Shadow’s tooth in 2002

Narrow spaces between some of the lines show years when she raised cubs.  Those narrow spaces are probably because she put much of her calcium into milk those years instead of into cementum.  She produced her first litter at 4 and produced new litters every 2 years after that.  She added so little cementum in some of those years that two lines look like one extra dark line.