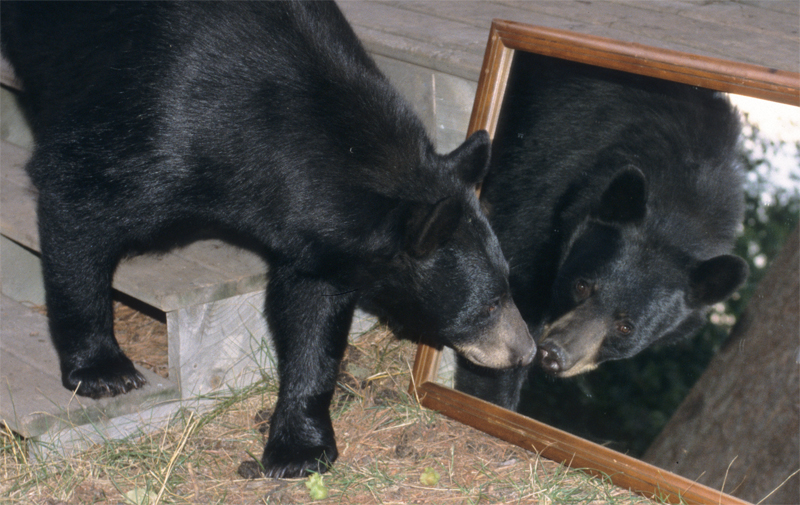 How Do Black Bears Respond to Mirrors?

Self awareness is a measure of intelligence. A captive chimpanzee reportedly sat in front of a mirror in a cage and eventually touched a dot on its forehead, showing that it realized the reflection was of itself. 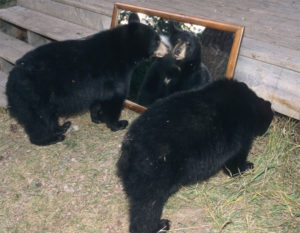 Unlike caged chimps, wild bears see their reflections whenever they drink from quiet ponds; so mirrors don’t get much notice. In the top photo, a bear briefly noted his reflection as he passed by. In the bottom photo, the two bears paused to give the mirror a brief sniff. One looked behind it.

All three looked at their reflections calmly with none of the tension in their eyes, ears, muzzles, and lips one sees in meetings between strange bears. The clear, vertical reflections apparently differed enough from reflections in water to be noticed.

In this way, bears differ from some birds that attack their reflections. These were savvy wild bears. It would be interesting to see reactions of captive bears that have never seen their reflections in water and are not busy with full wild lives. Would they be faster or slower than chimpanzees to realize that the reflections are of themselves?