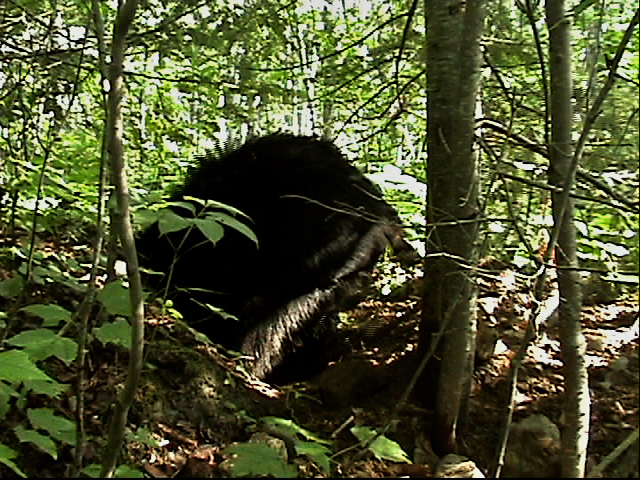 Before researchers from the Wildlife Research Institute videotaped 3-year-old June digging this den in Eagles Nest Township, Minnesota, they had no idea some bears made dens so early—July 19, 2004. It was the first time researchers watched a bear dig a den. The most interesting part happened when she encountered a 68-pound rock. She did not make futile attempts to roll it up the steep incline of the entryway.

She backed out of the den, smoothed the entry to make a gentler slope, and enlarged the entrance. Then she went in and rolled the rock out. It was humid and hot—78 degrees. She stood panting in the heat. It’s all in the video. The rock is in the Cub Room at the Bear Center for children to lift and see how strong they are compared to June.

Most bears in northeastern Minnesota make dens in September or October.

In early fall, June came back to this den and raked bedding into it and settled down for the winter. In January, she gave birth to her first litter. She and her two cubs left the den on April 4, 2005.

Not all dens are like this burrow. Some are in rock crevices, hollow trees, or brush piles. Some are under the upturned roots of windblown trees leaning 45 degrees. Others are under the trunks of down trees that are held a foot or two off the ground by the root mass. Some are simply aboveground nests.

A den, loosely interpreted, is where a bear spends the winter.

In residential areas, a den might be in a road culvert, a storm sewer under a street, or the crawl space under a house.

In the fall, June made a new den. Black bears seldom use the same den twice. She made a den big enough to hold herself and her cubs snuggled together. The den was not much bigger than the bears. The cubs helped rake leaves and other bedding material into the den.

If cubs become orphaned, they instinctively know how to make dens all by themselves.