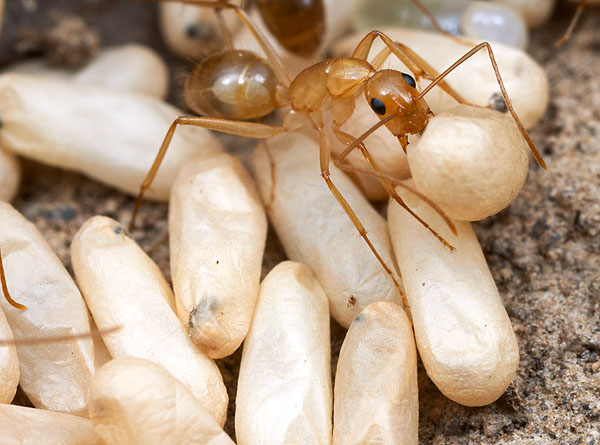 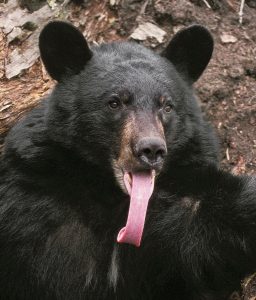 Ant specialists refer to ant larvae and pupae as “brood.”  These digestible clumps of fat and protein are the main source of animal protein for black bears over much of temperate North America. Black bears have long, sticky tongues for probing into ant colonies, as do other ant specialists.

Researchers accompanying black bears for 24-hour periods near Ely found that ant brood is a major food from late spring until mid to late summer.  It is a delicacy for 4-month-old cubs eating their first solid foods.  The cubs crowd in, often bawling, when mothers open ant colonies.  Hungry mothers show frustration at times but almost always defer to the cubs.

Bears find brood by keying in on pheromones and other chemicals ants use for communication and defense.  Researchers watched bears sniff out up to 200 colonies per day.

They eat mainly the brood, not the adult ants which use offensive formic acid and citronella for defense. Bears usually avoid anthills. Digging into them mixes too much soil with the brood.  They tear into logs or flip over rocks and other cover to ingest clumps of brood with a few flicks of their sticky tongues. Sign of bears digging into ant mounds is a sign of scarce food.

Biting into logs is the main use of the black bear’s long canine teeth.  Bears sniff along logs to locate the colonies and then tear in with teeth and claws as worker ants spray formic acid into the air and begin carrying off the brood.  If the bears don’t work fast, worker ants can scatter the brood before the bears get to it.  Bears flick these larvae and pupae into their mouths, sometimes along with the attached workers.  After digestion, some of the worker carcasses still hold bits of pupae in their mandibles.  When researchers experimentally put their faces next to the bears’ faces at logs, the researchers jerked away from the acrid cloud of formic acid.  They stood amazed that the bears could keep working.

Formic acid is probably a reason bears sometimes bite into insulated snowmobile seats, hot tub covers, and refrigerator walls.  These items all produce formic acid when the formaldehyde in the insulation breaks down, making them smell like ant colonies.

If summer berry crops fail, brood can be especially important.  In the hot dry summer of 2006, berries withered but ants flourished, and bears ate brood longer into the summer than usual.  Despite the berry crop failure, few bears searched residential areas for garbage and birdseed.

Bears work hard for small amounts of brood.  The amount eaten per colony has proved difficult to measure but is only a few grams.  It is no wonder bears add little fat when berry and nut crops fail and they must rely mainly on ant colonies and vegetation.