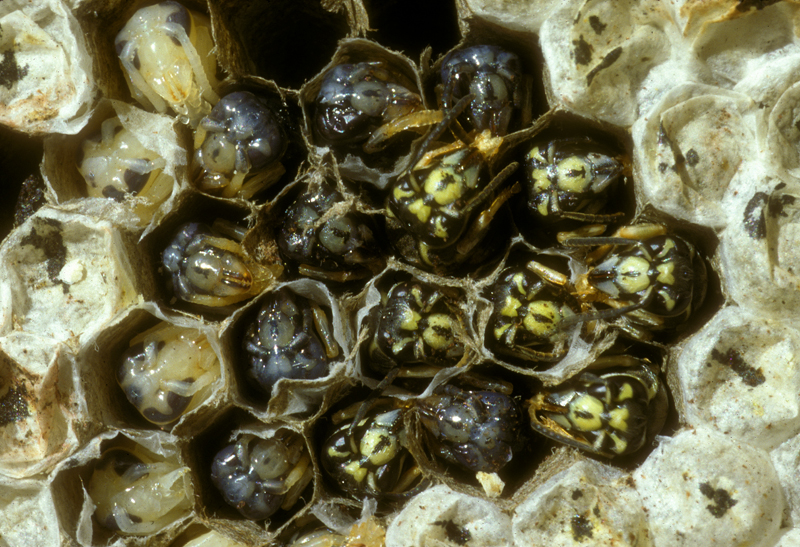 Insects and animal matter are less than 10% of the annual black bear diet around Ely and across most of North America.

Across America, exceptions occur along the Pacific coast where spawning salmon are available in some seasons and in northern Labrador where lemmings were 34 percent of the diet one year.

Most bears around Ely eat no fish unless they live near a stream where white suckers (Catostomus commersoni) spawn in spring. They usually pass up non-spawning fish, especially if berries and nuts are available. However, when preferred foods are scarce, campers can attest that bears will eat fish remains.

What bears eat depends upon what else is available—or is not available. 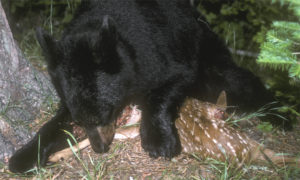 Meat is a very small part of the diet around Ely except in late May and early June when fawns are born. Researchers who walked with bears in late May and June watch bears catch up to four fawns. The bears don’t seem to actively hunt fawns. Instead, they search for ant colonies at that time of year. But if a bear smells a fawn, it stops searching for ant pupae, sniffs out the fawn, and pounces on it. It is often said that fawns are odorless, but they do have enough scent for the bear’s exceptional sense of smell.

Newborn fawns rely on their camouflage and lie still, making captures easy.  The first thing bears ingest is the high-fat milk in the fawn’s stomach.  Once fawns reach about 10 days of age they change escape tactics.  When bears approach, they bolt and easily escape.  Black bears lack the agility of dogs and cats to catch dodging animals. The bears soon ignore the scent of fawns until the next spring when a new batch of catchable fawns is born. 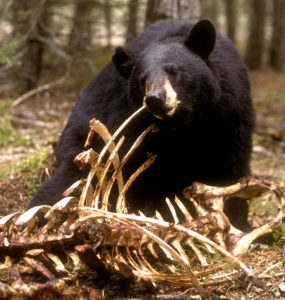 The three main reasons meat is such a small part of bear diets around Ely are that:

1. It is generally not a favorite food as evidenced by the fact that black bears around Ely usually ignore carcasses (fresh or rotting) they find in summer, especially if nuts and berries are available. They do eat carcasses in spring or fall.

3. Little carrion is available around Ely. By the time bears emerge from dens in April, wolves and ravens have cleaned up most of the deer and moose that died over winter, leaving only bones for bears to gnaw on. In fall, most bears are in dens before hunters begin leaving gut piles throughout the northwoods.

Nevertheless, individual habits and food preferences vary.  Black bears have broken into beaver lodges, have preyed on beavers on land, and a well-fed bear tried to break into a shed containing a beaver carcass. Black bears have been seen chasing adult deer in Minnesota and herds of elk in Yellowstone National Park.