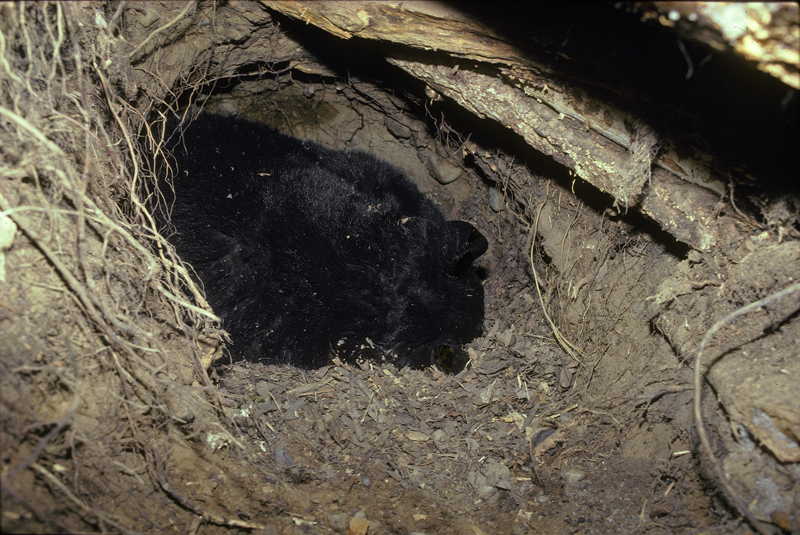 5 Stages of Activity and Hibernation

The annual cycle of black bear activity and hibernation has five stages: 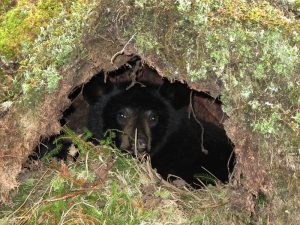 The stages differ in biochemistry, physiology, appetite, and level of activity. The onset and duration of the stages are genetically programmed to fit regional norms of food availability, which differ across America.

For example, around Ely, fall food is scarce, so bears begin hibernating in September or October and remain in dens for 6 or 7 months until April. If supplemental food is provided to these bears in fall, they abandon it to begin hibernating on time, as they are genetically programmed to do. Bears around Ely usually continue hibernating through winter thaws. 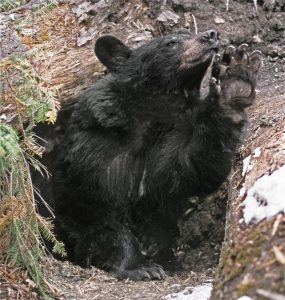 The activity schedule is very different in eastern North America where acorns, hickory nuts, beech nuts, and other foods become available in fall and some foods remain available all winter. Bears there are genetically programmed to delay hibernation until late November or December and hibernate less than 5 months. Hibernation there is typically not as deep, and some bears emerge to forage during winter thaws. Food sometimes remains available throughout winter there, and some bears continue foraging throughout winter. 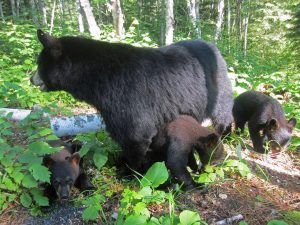 Stage 1—  Hibernation of study bears in close dens is continuous dormancy with distinct decreases in heart rate and metabolic rate. They use up to 4,000 kcal per day, mainly body fat, and do not eat, drink, urinate, or defecate. They reduce oxygen consumption and metabolic rate to a little as 25% of summer rates and breathe once per 15 to 45 seconds. Heart rate can drop periodically to 8-21 beats per minute, and blood flow to skeletal muscle, particularly the legs, can be reduced by 45% or more, making some bears slow to become active in winter. Blood perfusion rates of peripheral tissues can fall below levels needed for aerobic metabolism in humans. However, wild mothers in open dens maintain near normal body temperature (high 90’s Fahrenheit), ingest their cubs’ urine and feces. They also lick up drops of meltwater, eat snow and icicles, urinate, and defecate. 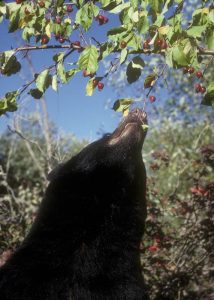 Stage 3—Normal activity typically lasts from green-up in spring to the onset of hyperphagia in midsummer or fall, depending upon region. During this stage, bears with unlimited food eat 5,000 to 8,000 kcal per day. If they are denied water and food during this stage, they cannot duplicate hibernation responses. Instead, they become dehydrated, utilize muscle for energy, and accumulate nitrogenous wastes in the blood, which can be fatal. 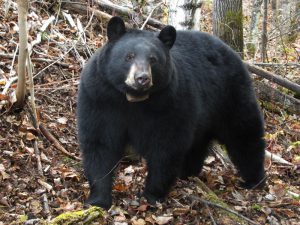 Stage 4—Hyperphagia is a period of excessive eating and drinking to fatten for hibernation. Black bears with unlimited food and water ate 15,000 to 20,000 kcal per day and drank several gallons. Large amounts of water are needed to process the large amounts of food and rid the body of nitrogenous waste. Daily urine volumes for two bears were 2-4 gallons (8-16 liters). Nitrogen losses were 2.4 to 3.7 ounces (69-104 grams) (Nelson et al. 1983).