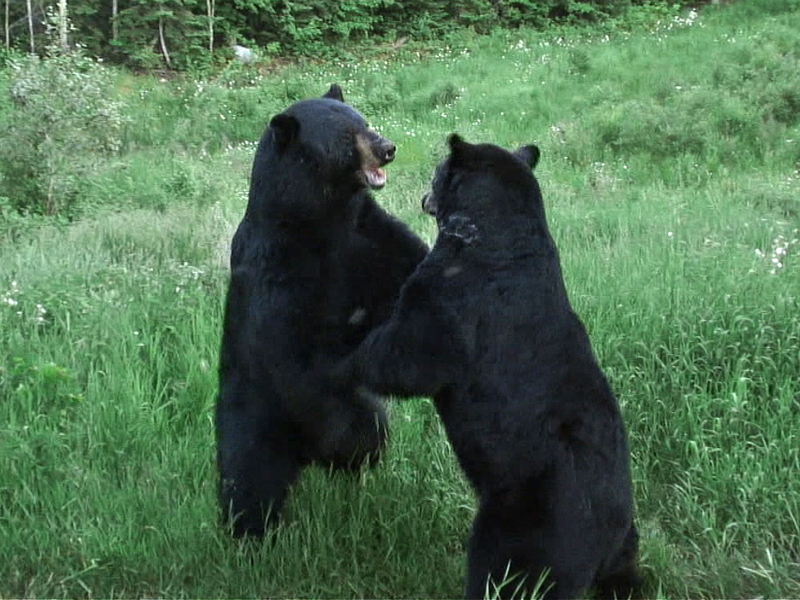 Lumpy weighed well over 600 pounds in fall and was the biggest bear in the area. One-eyed Jack was rightfully hesitant about confronting him once he saw who it was guarding Midge. One-eyed Jack was no small bear himself. He weighed 572 pounds on August 30, 2006, a couple months after the fight, and probably gained more weight after that.

At the time of the fight (June 14, 2006), Lumpy weighed 354 and Jack weighed 330, both approaching minimum weights for the year. Males don’t eat much while courting. They typically lose 20-25 percent of their weight during mating season, losing as much during mating season as over winter.

Despite their ferocious battle, both were mild-mannered bears around people. Lumpy was skittish, unapproachable, and usually unseen. Jack was calm enough to accept researchers radio-collaring him without tranquilizers, however, because his neck is bigger around than his head, a collar would slip off. Under his fur, many scars cover his head, neck, and shoulders from fights of mating seasons past as is typical of older mature males.

Although Jack lost out to Lumpy in this fight, he was one of the most successful males during mating seasons. Jack had spent the two previous weeks with three different females. His gentle, patient nature seemed to earn him trust among females. Even mothers with cubs tolerated him to an extent. Females he had mated with remembered him and were tolerant and sometimes even friendly with him months after mating season.

When researchers walked with estrous females, gentle Jack would sometimes join them. He followed the foraging female, ate little, and marked trees around her. He mostly ignoreed researchers, male or female.

Researchers came to know these bears after they each lost an eye. At least one was the victim of a man who bragged he shot a big bear in the face with birdshot as the bear ate dandelions in his neighbor’s yard. He told how he came out his door, saw a bear that had the impudence to look at him rather than run away, and shot the bear in the face with his .410 to teach it a lesson. This is an attitude the North American Bear Center hopes to change.