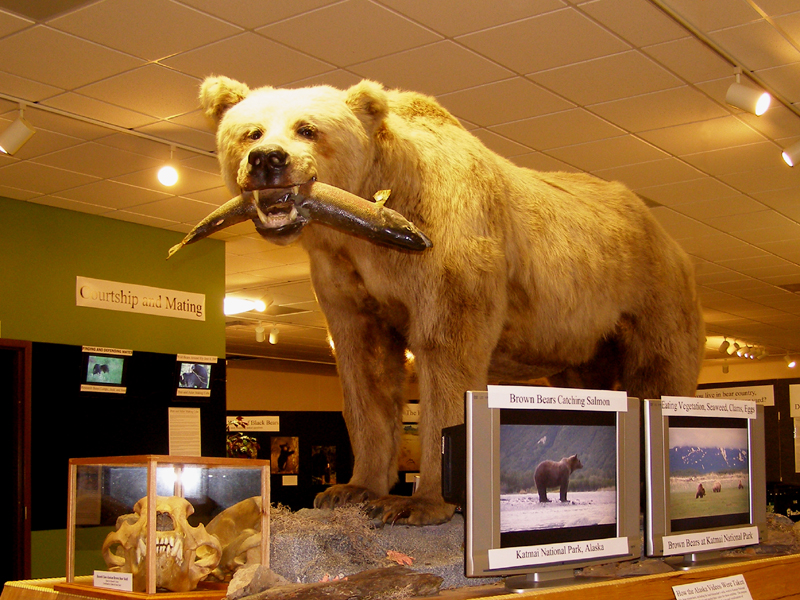 Is It Brown Bear or Grizzly?

We don’t know.  The mount came to us with no information about its place of origin.  It is probably a Kodiak or coastal brown bear from its large size and non-grizzled fur.  That would make the fish in its mouth appropriate because fish are an important food contributing to the large size of both of those subspecies.

Further, taxonomy of these bears is undergoing constant change.  The brown/grizzly bears of North America were once separated into 58 species.  Now all the brown bears of the world are considered one species-Ursus arctos.  This includes coastal brown bears, grizzly bears, Kodiak bears, and the various Asian and European subspecies.

In America, there are currently three subspecies of Ursus arctos:

Taxonomists are considering shrinking the list even further.  Some say interior grizzlies and coastal brown bears should be lumped into one subspecies because they interbreed along a continuum from the coast to the interior with no clear geographic line where one subspecies begins and the other ends.  The interior grizzly has the classic “grizzled” hair tips and is generally smaller than coastal brown bears or Kodiak island subspecies.

Some also say the polar bear should be considered a white phase of the brown bear.  Support for that comes from new electrophoresis evidence and the fact that offspring of brown/polar crosses are fertile.

The North American Bear Center thanks Michael Eaton, Creative Director of Bass Pro Shops Wonders of Wildlife Museum in Springfield, Missouri, for the loan of the mounted bear pictured above.