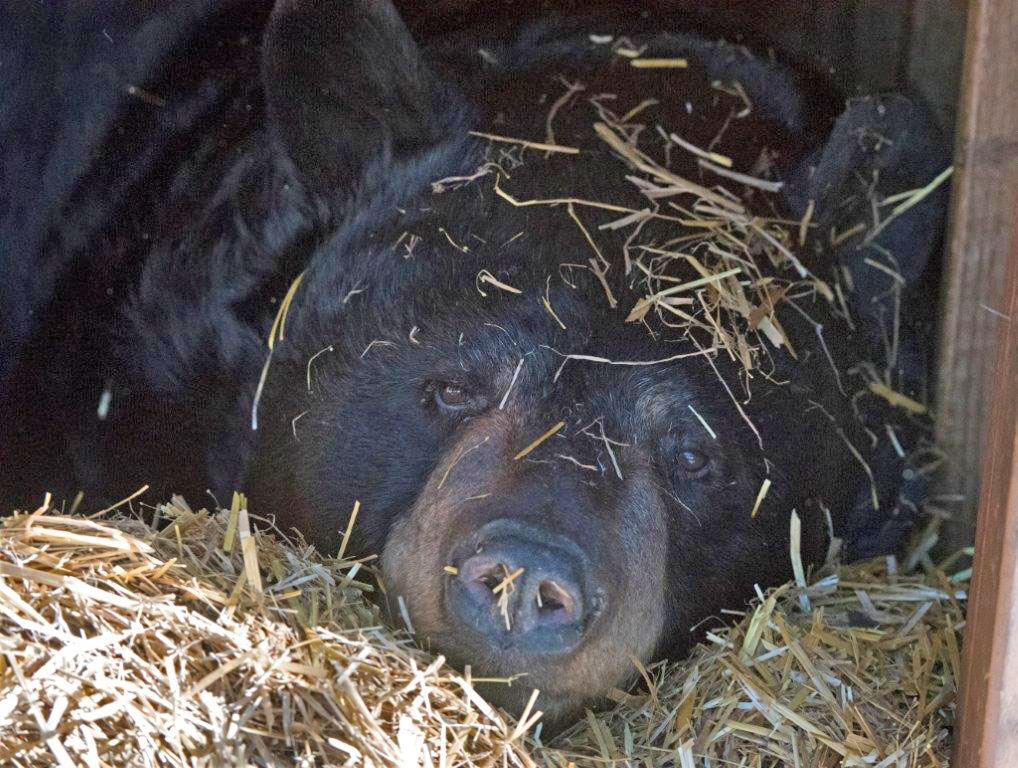 The bears are going to be hibernating soon.

This week I am going to talk about the materials used by bears to make their dens comfortable for their long winter’s rest. Denning materials may include bark from cedar trees, conifer boughs, wood chips, leaf litter, pine needles and soft mosses.

At the bear center we give all the bears straw for their man-made dens. I also include leaves and ground materials for the dens raked up from areas they are familiar with.

Ted likes just straw, the softer the better. Lucky prefers straw and leaves. He also prefers to rake and adjust his den to his liking. Tasha prefers leaves but has raked in straw as well. Tasha also creates wood chips by chewing small pieces of wood into piles atop her den floor. Tasha also rakes soft grasses and weeds as all watched her do in 2020 as she took over the rock den. Holly and Tasha both strip cedar to be used in the den.

A few years ago the staff, with the help of volunteers, planted rye grass seed in the bunkers. The grass grew and we thought Lucky or Holly might eat it. The bears have not tried to eat it but it does make the bunkers look better than they did. What we’ve noticed is Lucky won’t step on the grass and Holly is reluctant to walk on it too. It is like the soft mosses that bears rake into their dens along with other ground debris.

I talked to Dr. Rogers about Lucky’s quirky behavior and he was interested. He said bears generally walk in the same footsteps as the bears before them. This is true; but his reluctance to step on the grass is a little different. He tries to find a way around it by only stepping on the dirt. So if you are watching him in the bunker and see him move quickly it’s because he doesn’t want to step on the grass.

From Bear Tracks and Trails on our website.
“Bears often follow deer trails and forest roads, but some trails are used mainly by bears. These consist of a series of depressions created by multiple bears placing their feet in the same footsteps year after year.”

Holly is settling down in the large bunker. We are aware that she dug a den. Also we know that at this time last year Holly wouldn’t leave her den and did go into hibernation earlier than expected. This year because all four bears are doing things to prepare for hibernation almost two weeks earlier than last year, I decided not to chance Holly going into her den and not coming back out.

The work that needs to be done within the enclosure is not only to protect the bears but to protect our guests and the surrounding properties. The dead trees are an invitation to fire and that’s one thing we don’t want. There are also tree limbs and dead aspen that endanger the walkway out to see the bears. Therefore the bears will remain in their personal enclosures for the rest of the season.

Tasha will have a chance to dig a den under the rock formation near her enclosure. We will open the side panel between the cabin and haven allowing her to move freely into the cabin enclosure and to the exposed rocks. I hope this will allow her the privacy and the opportunity to dig a den.

Ted is a happy bear right where he is. His gate was open on Monday but he chose to stay in his enclosure. He will get another chance later this week. He continues shedding large mats of under fur but his rich black fur is coming in nicely. The fur on his back paws has grown in and although Ted has slowed down, he is doing well.

Thank you to all that participated in the online auction, sponsored by the Northwoods Bear Foundation. It went very well; we’ll have numbers for you in a later writing.

Coming up in October… Ted’s pumpkin carving contest. Also in October I will highlight one of our bears each week with my favorite pictures of this year.

The bears will still need nuts, cranberries and dried apricots until the end of our season. They will have enrichments in their enclosures even as the year winds down. Our Amazon Wishlist is still up and running.