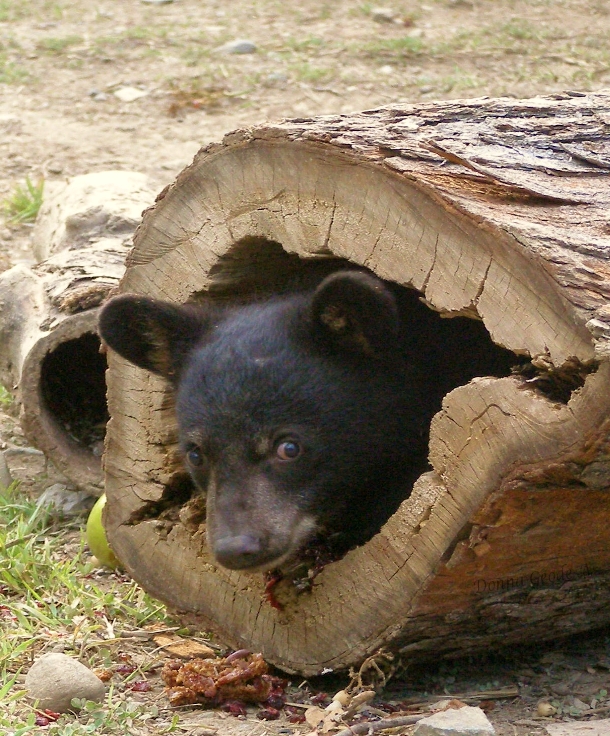 The four ambassador bears at the North American Bear Center share 2.5 acres of natural wooded area. The pond and scale enhance the viewing area along with the rock den. The woods remain completely intact with the exceptions of blowdowns. Their personal enclosures line part of the interior along the mound. This week we had a tree service come in and remove dead and dangerous trees. Soon after they finished, the girls (Holly & Tasha) were freed to the main enclosure.

Lucky bear came to the North American Bear Center on July 6, 2007. He was 7 months old, very feisty and weighed under 20 pounds. He was most likely taken from a den and became too much for a person to handle. The Wisconsin DNR along with the rehabilitation facility deemed him unreleasable. We were asked if we could give him a home and Lucky came to us at that time. Read more about Lucky on “Meet Our Bears”.

In 2007 the facility was just beginning and to add a young bear in with two older bears seemed like a challenge. Dr. Rogers wanted Lucky to bond with Honey but as it turned out, Ted took on the role of wanting to nurture and play with Lucky. The bond between Ted and Lucky was tight until Lucky matured, he was then separated from Ted. Upon talking to our Veterinarian it was suggested that Lucky’s behavior may change if he were castrated. In April of 2013, Lucky was castrated but the trust was broken between the two males and so we go on with the males permanently separated.

A part of all four bear’s daily diet includes a raw egg in the shell. It’s one of Lucky’s favorite foods. He drools upon seeing it and is very careful as he doesn’t like to crack it until he has it right in place. He also likes Brazil nuts, grapes and watermelon. Lucky is one of my picky eaters. He doesn’t like strawberries unless picked from the ground. He loves it if we find a nest of ground hornets with larvae still in it. Although he doesn’t forage as much as the females, he does enjoy chokecherries both on and off the branch as the rest of our bears do. All of our bears prefer wild berries over store bought. Our growing season doesn’t support their needs so we supplement their diets with store bought fruits, vegetables and nuts.

I hope you enjoy the pictures from this past summer along with his cubby picture.

The interns decorated four jack-o-lanterns for you to vote and select which bear gets each. Keep checking our Facebook page for photos and voting opportunities. A quick reminder, if the bear is in hibernation, the treats will then go to the other bears. This is an annual event for the fall interns, they are having fun creating their jack-o-lanterns.

We still have a need for tree nuts, apricots, dates, cranberries and dark cherries from our Amazon Wishlist until our season ends on October 23, 2022.