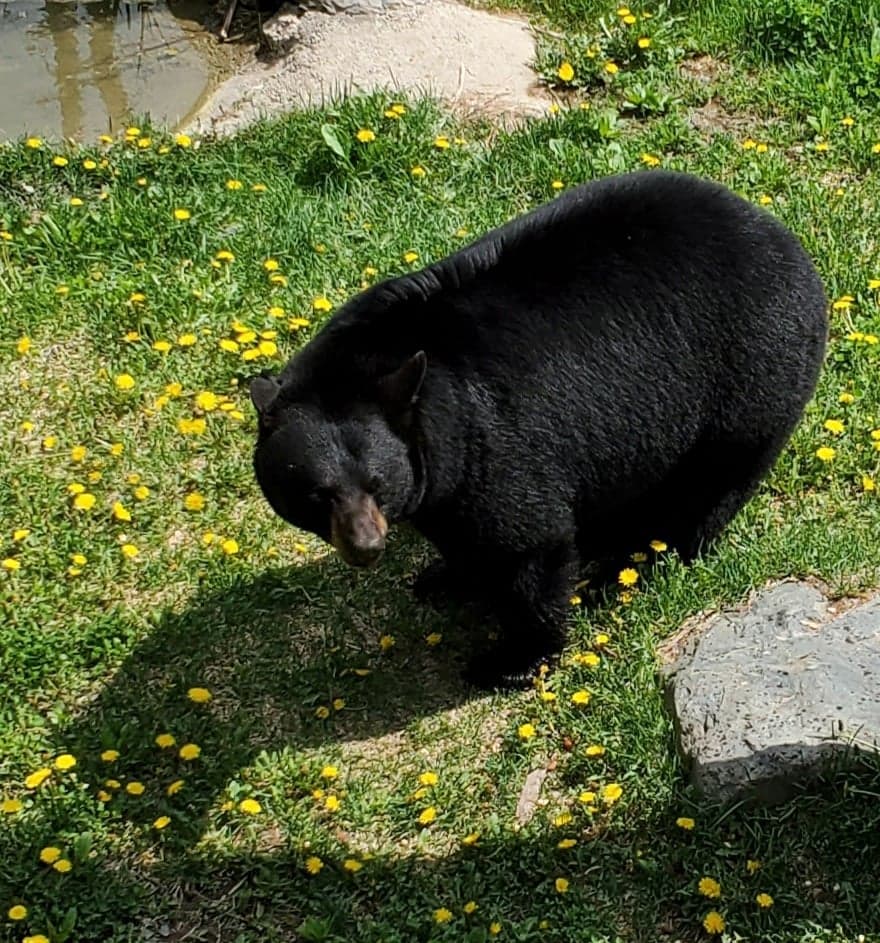 Fun fact: A group of bears is called a sleuth or sloth, I use sloth. 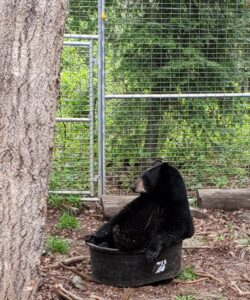 The weather in Ely has been in the low 80’s for a week and then suddenly dropped to the 40’s, quite a change. We even anticipated snow in the forecast.

The bears are currently starting to shed their winter coats. All bears have two types of fur: the underfur and guard hairs. Underfur is soft and dense and serves as insulation and protection from snow and rain. The course guard hairs are anywhere from 3 to 6 inches long. Some are straight and some curl. Underfur looks and feels like soft wool. As the bears go into the shedding months of June and July, their coats will turn brown as the sun bleaches them. Tasha usually sports a mohawk style look for a few weeks. As summer turns to fall, their heavy coats grow back in.

Carolyn recreated our feeding tubes by making them look like birch and tree logs. Ted uses his tongue to retrieve goodies in the new log feeder. Black bear tongues are long and sticky. This helps them while eating ant pupae, bugs from a log or beehives. They quickly dart their tongues at the pupae or bugs and quickly eat as much as they can before getting bitten or stung. In Ted’s case he uses his tongue to retrieve the peanuts from the small holes of the enrichment log.

Lucky put on a nice show for our guests as he picked up a branch and played with it. He tossed it in the air and caught it and rolled around as if he were wrestling it. The giggles and laughs from the children are always contagious, he seems to love showing off as much as Tasha does.

On Friday, a group of 120 children from Virginia, MN schools visited. Tasha was in her enclosure sitting in her tub with both feet in the air, until she saw the school group; she then came to get treats from our volunteers.

Holly is still chasing Tasha but doesn’t seem to be as serious as she was a few days ago. Tasha generally initiates the chase by seeking out Holly, Holly enjoys the chase and will often wait and ambush Tasha from the brush.

The bears’ half-birthday is coming so vote now and mark your calendar for June 13th at 10:00am. Your vote is important to the bears as they look forward to their yearly pinata reward. This year Ted celebrates being 24 and a half years old. Lucky will be 14 and a half, Holly 8 and a half and Tasha 6 and half. Where does the time go? I remember giving Lucky a bottle; how sweet he still is. Now he’s a big bear but sometimes I see that little cub in him as he plays with logs and sticks.