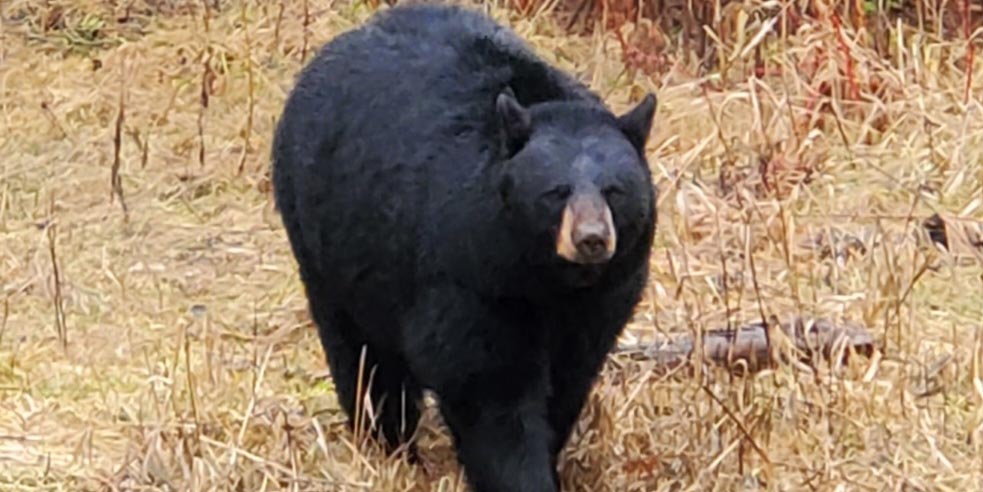 All of our bears are up and moving around. I thank you for your patience with Ted, I wanted to wait a little longer to make sure his route to the pond area is safe for him.

First things first, our Half-Birthday Fundraiser for the bears is coming up soon. In keeping with tradition, each bear will receive a pinata filled with their favorite treats. You get to vote/donate for which pinata they will received. Voting begins May 29 – June 10th and you can vote as many times as you’d like.

The choices this year are donut, strawberry, watermelon and star. Be sure to join us on June 12th at 10 am to watch as the bears receive their pinatas. All donations will go to our bear food and care account, this year we will be using those donations for new dens for the bears.

Ted turned 25 years old in January and his birthday was celebrated while he slept, but he knows he’s loved. He thanks everyone that donated for his birthday.

I may be biased but Ted looks great. He has figured out how to use his muzzle to crack his egg after several teeth extractions last fall. He manipulates the peanuts in the shell and does a very good job not to miss one. To prevent him becoming overanxious, his care givers hand-feed a few and then give him a pile.

His big adventure (first day into the big enclosure) was Thursday. He was happy to check out the new grasses on the mound. Eventually he made it to the pond area and got on the scale weighing in at 518 lbs. He needed no help going back to the chalet, he was out for 2 hours.

Lucky bear is famous for his first face wash of the season in the pond. It is also a way for him to show his playful skills while cooling down all at the same time. As Dr. Rogers wrote in his update of July 17, 2021, cooling off and water play are used to the bears advantage for both.

It was to our guest’s delight to see him wash his head, splash, swim and groom. He also did a few summersaults past the viewing windows. Our guests and staff couldn’t have been happier.

He did visit Ted through the fence, the greetings were amiable. He marked several trees and played with some fallen branches, then returned to the pond.

Holly was out for the first time on April 8th, playing in the snow and chasing Tasha. We then had more snow, the never-ending winter here. She is now up and moving, climbing trees and eating catkins and maple buds. She was seen last week at the rear of the mound eating maple seeds. Her natural foraging skills allow visitors to see bears climbing and foraging on branches that could break but seem to withstand their balanced weight. 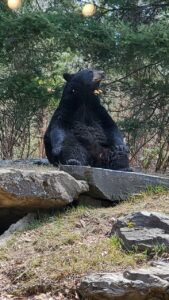 Tasha bear, now seven years old, is at a healthy weight of 310 pounds. She has been swimming in the pond and playing on the logs. Our cameras have also caught her in the cub tree–usually after a good chase by Holly. They have also caught her climbing the numerous birch, aspen and maple trees to eat the catkins and buds. 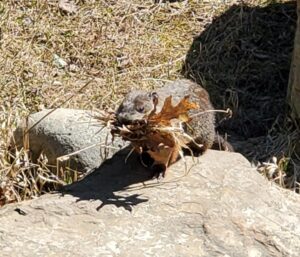 I was able to take a nice picture of one of the resident woodchucks (Marmota monax) gathering bedding. If it is a female she would have mated in late March. The gestation period is 32 days. Will we see another young one? Time will tell. Woodchucks are true hibernators. They fatten up through the summer and go into their nests underground and hibernate from October to March.

I am hoping for a busy season, the bears love busy. Being busy means more treats.

Thank you for all you do.
Sharon Herrell, Sr. Bear Keeper