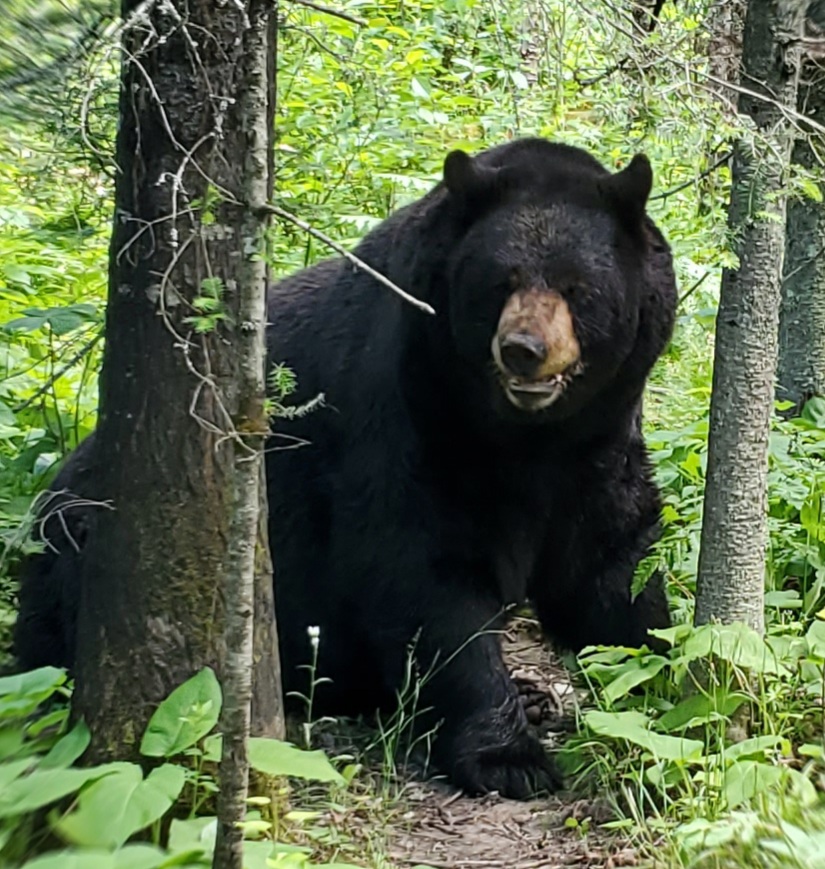 Ted poses in the wildflowers, Lucky and his many moves. 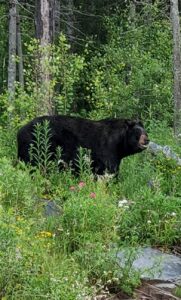 On Monday afternoon Ted finished his enrichment in the viewing area and went for a long walk around the pond. He stopped in several spots to eat the foods that the interns laid out for him. He checked the marking tree for any new smells.

As he entered the mound area, he walked on top of the mound avoiding Lucky and Holly. Again, I think he wanted to by-pass Tasha as well. He turned and went to his left which brought him to a bear trail behind his den. He marked the area by rubbing his head, biting a small tree leaving his scent for the females to find. He then walked towards the rear of his den. He again saw Tasha, turned, and walked the long route to his bear gate. Ted is doing more and more exercising and using instinctive avoidance strategies of his own choosing as not to engage with Lucky.

On Wednesday Ted spent 2 hours cruising around the pond, relaxing in the overflow, and sitting to watch people on the deck. He is back to resting on the logs and rocks as he used to do. He is doing an awesome job. 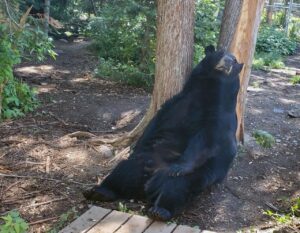 Lucky spends a good share of his time while in the cabin den doing his “yoga” moves or doing what we call meditating. He often sits in an upright position with his paws on his knees or on a tree. Although he likes to be out with Holly, and she is enjoying his company, he also likes to just sit by the cedar tree and watch people. He has grown into a very large handsome male. Lucky has no scars and with the exception of an occasional slap from Holly his muzzle is scar free. 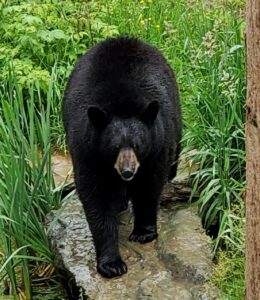 Estrus for Holly is winding down and the end is coming. As the interns were introduced to a very moody temperamental Holly, they now see her as a somewhat delight to work with. Notice I said, somewhat delightful. She definitely has her likes and dislikes. She again is listening to them instead of ignoring them.

Our little Tasha, is just teetering on the edge of 300 pounds, relaxes daily in her tub. It’s so much fun for the interns to explain her antics. She is shedding and her back end is brown. She along with Holly are turning brown as underfur pushes out of their coat and bleaches in the sun.

Many people ask why I keep Tasha’s gate closed while she is out. As each bear(s) have their time in the
2 ½ acres their gates are closed with the exception of Ted. It is my job to keep all the bears safe. There is plenty of shelter in the forested portion of the enclosure for their nighttime rest.

Lucky, Holly and Tasha are currently shedding their winter coats. Ted will begin to shed in July.
A splattering of color surrounds the pond. Birds-foot-trefoil, Ox-eye daisy, Swamp buttercup, Red clover, Canada Hawkweed, and Dianthus beautify the landscape. It makes for great photos of the bears as they move in and around the flowered areas of the pond.

On July 4th, the bears will be in their personal enclosures for the night, there could be loud fireworks and they feel more secure in their own enclosures.

Thank you to those that purchased food for the bears from our Amazon wish list, the bears appreciate the treats.