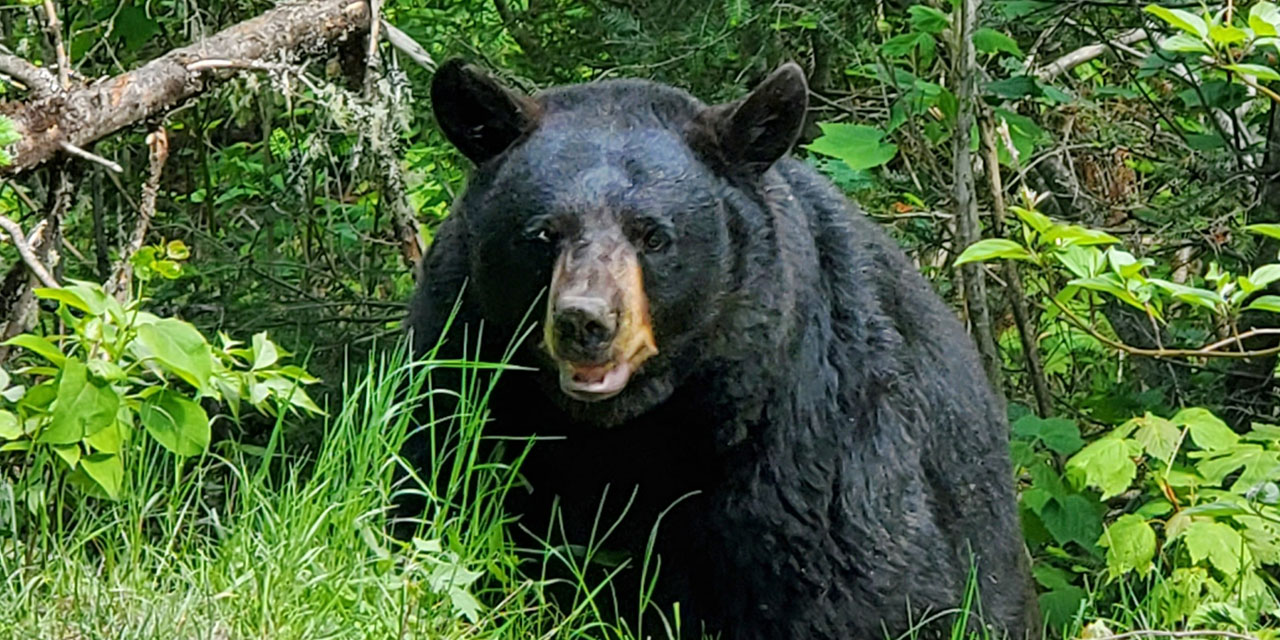 Bear fact: “A bear nest is a cluster of broken branches from feeding and not where bears rest. They are made when a bear sits in the crotch of a tree and pulls the branches closer to eat catkins, buds, leaves, fruit or nuts.”  Click here to read more about Feeding Sign.

Holly made a nice nest when she used the dead fall as her refuge during her first summer with us.

As Spencer conducted the introduction of summer interns this week, Holly and Ted made a visit to be part of the process. This year we have six Bear Educators and two Ecology Hall interns. These bright and talented students bring a spirited energy as they join the staff at the NABC.

This year the attraction of the cedar trees in the cabin den has been a focal point for Holly and Lucky as they climb, strip bark and sit looking over their territory. They can see the trail, the main enclosure, and behind the gates. I wonder if the cedar smells better up there and the pieces Holly bites taste better.

The bears had their yearly health check-up by Ely Veterinarians, all bears healthy, no dietary changes at this time.

Ted spent several hours out in the main enclosure on Thursday. He ate, cooled down and splashed himself in the creek and then napped. The cam tried desperately to find him but he remained well hidden in the trees. This spot was and is used by Ted frequently when he is napping in the main enclosure.

While Ted was on his walkabout, the interns and Spencer put his sunshade up. They added some new dirt in an area where Ted likes to stand and moved his tub to an area near the back fence. Ted will think he’s moved into a new enclosure.

Lucky had an absolute fun time pulling up the reeds in the pond. He was chewing on the roots and then in a display of action, thrashed it back and forth. It looked like a small hurricane had hit the pond. He did it several times and was caught on video and in pictures.

Tasha is still in estrus and spends her day between Ted and Lucky. She plays with the sticks and logs she’s broken off with her mouth.