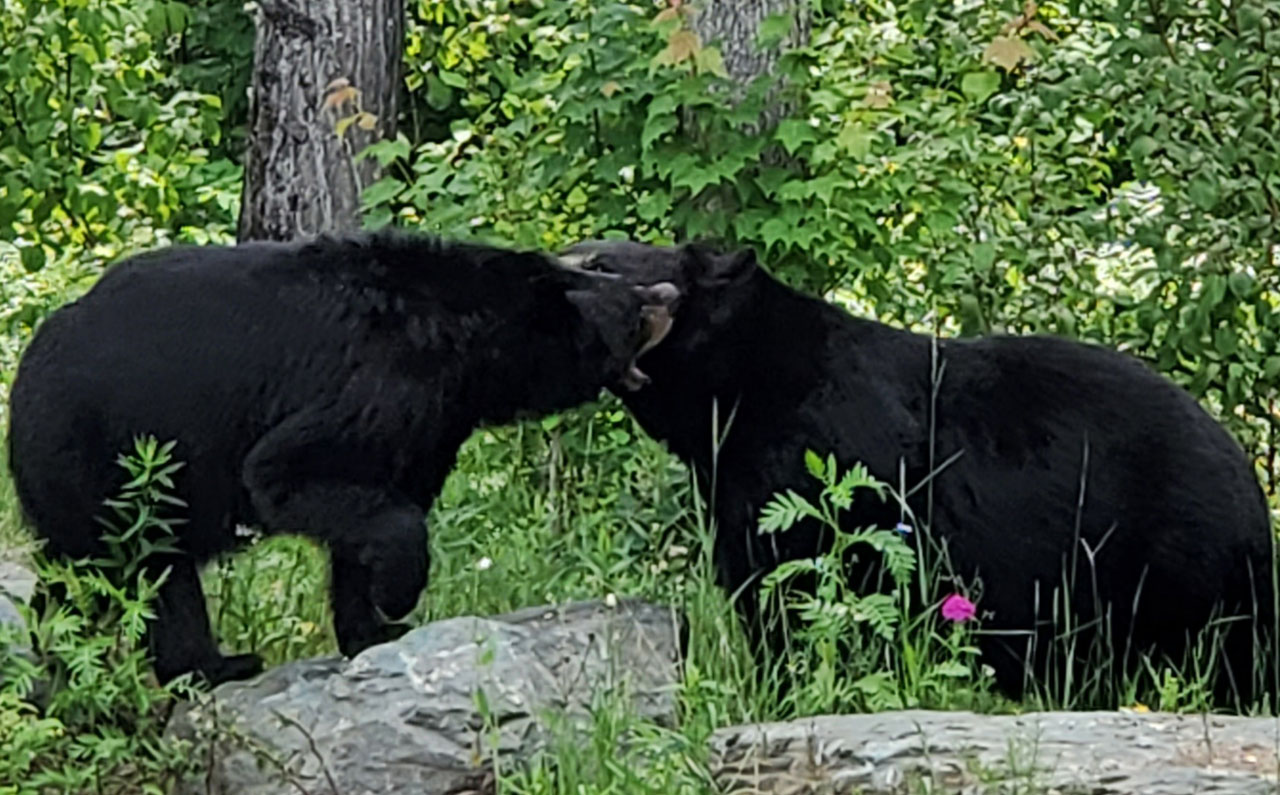 Ted debuts as a celebrity on the local news
and then decides to stay out the whole day.

Happy July 4th – Hope everyone had a safe holiday. 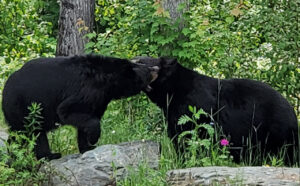 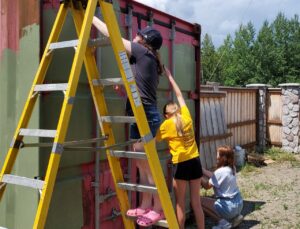 Earlier this week a youth group from Camp House asked if there was a project they could do for the bear center. It was suggested that our bear food storage container could use a fresh coat of paint. They showed up ready for the task and did a great job. It looks really good and matches the green scenery around it. Thank you. 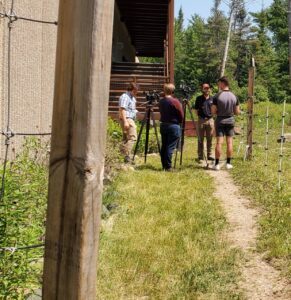 This past Wednesday a film crew from the Duluth TV station, KBJR came for an interview with our lead biologist, Spencer. Spencer, mentioned Dr. Rogers’ concern of the food shortage in the forest creating problems for bears; getting into trash containers and houses etc. As Spencer continued, he stated, with the sudden freeze we had early in June most of the berry crops were destroyed in various areas around Minnesota. It has been especially problematic in the Duluth and upper north region of MN. Spencer did a superb job answering questions and was assisted by our own beloved Ted bear. Both Spencer and Ted did a spectacular job for black bears everywhere. As soon as it airs, we will post the story on our Facebook page.

Meanwhile in Lucky’s den, Holly has put her “paw” down and it’s over between her and Lucky. It couldn’t last forever, right? Well, estrus seems as if it’s been here forever. Lucky and Holly had a last moment of “togetherness” on Tuesday. Things change so quickly here; on Wednesday she was done with him. The heat had a lot to do with it too. I am happy it’s finally over and the girls will soon be out together again. Stay tuned to see how that works out; there is rarely a dull moment at the bear center.

One of our interns got a rare picture of Holly looking pretty and sitting in the shade. Holly can be a very sweet bear at times, she also plays games as she peeks through the cedar trees on the mound. Thank you Cypriana.

Tasha is getting some exercise swimming and will soon be out with Holly again. She does enjoy her Behind-the-Scenes visits and the food reward that goes with it. She continues to check out the rock feeder to see if there are treats in it giving our visitors a great view of her as she reaches for the food. She is now shedding heavily and we’re waiting to see her mohawk.

Lucky posed in the wildflowers and wandered off to check other food sources. One of the bear’s favorites is the serviceberry tree that is just beyond the falls.

I’ve added some bear foods and supplies that can be purchased for them from Amazon. Please check it out our wish list, and if you can purchase any of the select foods, our bears will love them. Click here for Amazon Wishlist.