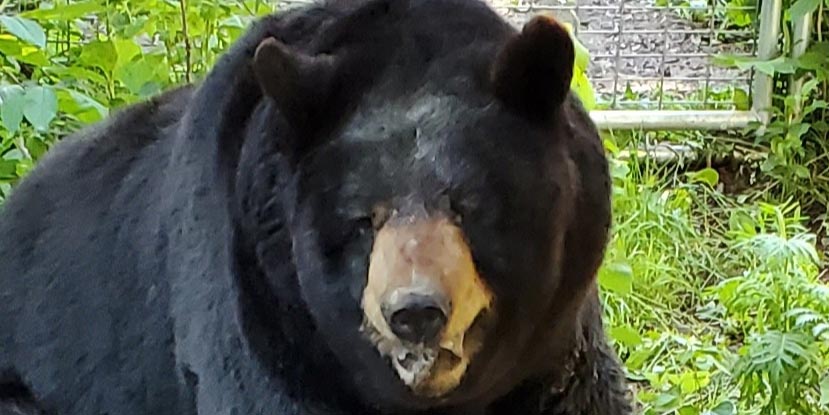 Last week I mentioned our Northwoods Ecology Hall interns but failed to include their pictures. The Ecology Hall interns take care of the amphibians, reptiles, fish and other small critters that potentially coexist with black bears in Minnesota. They also help with bear care when needed. In the photo Brinn is holding our garter snake and Dee is holding the tiger salamander.

Ted had his normal big day out on Thursday. He had a short nap and then had his enrichment. His enrichment included some different frozen tasty treats. One was applesauce and nuts, Ted liked it. Next, he ate the jelly with apple/raspberry juice and the last one he didn’t touch, was peanut butter with applesauce. He also had a short visit with Lucky through the fences and then walked back to his own enclosure where he had a cold fruity treat waiting for him.

Lucky cooled himself off in the overflow creek. He chewed on some of the reeds near the rock bridge. As soon as Holly had finished eating, he was following her. They walked off into the woods. It’s interesting this year to watch the mating ritual. Mouthing each other, sparring and an occasional coupling. This will soon end as we move into July.

Holly and Tasha are tolerating each other and playing. They have played both inside and outside their enclosures. Estrus seems to be lasting longer this year than last year. The interns are learning the differences in how bears vocalize and interact with each other.

The bears have just started to shed in the past week. Shedding is now noticeable in both Holly and Tasha. As their hairs are bleached by the sun they turn to lighter shades of brown.

Our interns are learning and sharing their knowledge of bears through social media using NABC TikTok. The bears are becoming more and more popular with almost 120,000 views on some of the videos!

Coming soon–the interns will be designing bags for our annual auction of bear bags. Be ready. This year we have a couple of interesting auction items, so keep this in mind as the summer rolls on and watch for more details. Also coming this month–little things you might not know about our bears.

We have exciting news to share with you on Facebook Live on Thursday,  July 7th at 11:30 am. Please tune in, you don’t want to miss this one. Exciting, beary exciting!

Thank you again for sending nuts and dried fruit, we appreciate your generosity. The bears eat them daily.