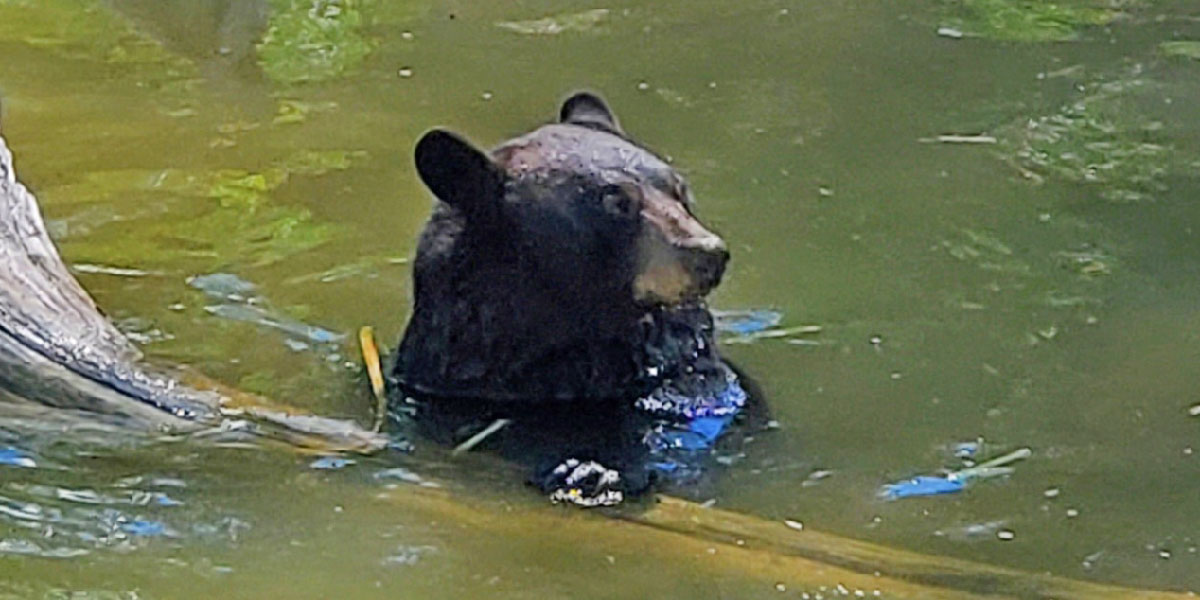 Bear fact: Most females give birth to 2 or 3 cubs per litter. In the Ely area we have had births of 4 cubs and 5 cubs. The 5 cubs were born to a non-clan bear. More on litter size.

Less known fact about Ted: We now cut his food up for him and he doesn’t like Sharon to shower him.

You donated over $3,000 for bear food and care!
Thank you to all of our winners and to all that participated.
A special thanks to our friends at the Northwoods Bear Foundation
and the anonymous bidder that matched the bids.

This has been an extremely hot week. The bears have had a hard time staying cool. Ted is a priority; we frequently give him showers and keep and his tub full. He lies under the shade cloth or behind the chalet on the cool ground. He also had watermelon and slushies to help him stay cool. He made a debut for the cameras today and may be featured in some media that brings folks to northern Minnesota.

Lucky played in the pond with some of the reeds he had previously pulled up. At the stand-up feeder he entertained some little girls that giggled and laughed as they watched him eat.

As they looked down at him, one of the little ones said, “Grandma look at his big paws” Lucky was using his paws to move the food around to get the tree nuts and cranberries.

The interns wanted to see what Lucky would do with a whole watermelon. He tried to pick it up and dropped it, he used his claws, made an opening and picked it up and took it “to go”. He enjoyed it in his private dining room above the rock den.

Tasha is rapidly shedding her coat. She has huge patches of bleached fur laying on top of her black coat. Bears shed their undercoat and as they do, their guard hairs, that are long and stiff lay flat on their back. As the undercoat grows for winter, the coat starts filling out and that’s what makes them look so large, and in Tasha’s case round. Our interns also gave Tasha a whole watermelon, she used her strong curved claws to dig into it and then sat down and enjoyed it.

Holly has had a hard week. We know how temperamental some bears can be and how they have excellent long-term memories. Holly exceeds most when it comes to being temperamental.

Some of our seasoned volunteers are experiencing the wrath of Holly. It’s not pleasant but she is a female bear and she does run a tight ship both with the bears and her caregivers

When I first started working at the North American Bear Center, Dr. Rogers told me to let the bears smell you as you are. If you introduce yourself to a bear while wearing a hat, continue to wear the hat until the bear knows it’s you. Sunglasses and facemasks are the same, we let the bear see us with and without them. Holly may be having some issues with not recognizing and being over stimulated to take action on an intruder in her territory. The volunteer later tried to approach Holly without sunglasses and she received a much better reception. Holly was still a bit curious, but she didn’t exhibit the immediate bluster or bluff charges. We can only hope that that is the issue.

This week will begin a new auction. Our interns wanted to do a fundraiser for the bears. They thought it would be nice if the bears had a few new dinner bowls and asked if they could do a fundraiser. The winner of each bowl will receive the old worn-out bowl all of the contents shown in the photo. Dr. Rogers will also sign the book! The Northwoods Bear Foundation has graciously agreed to host the event. Bidding will begin on July 28th and ends on July 31st at 5 pm. Click here to place your bids.

I want to thank you all for supporting our efforts to raise bear care monies. I also want you to know how very much the bears appreciate their nuts and dried fruits from our Amazon Wishlist.

Thank you from “da bears” and Thank you for all you do.
Sr. Bear Keeper, Sharon Herrell