Bear fact: Lean bears can exceed 30 mph running both uphill and down.
Less known fact about Holly: Our 9-year-old female has 3 white spots on her chest.

This week kicks off the yearly Bear Bag Auction fundraiser, brought to you by our interns and our friends at the Northwoods Bear Foundation. The interns designed the bear food bags and are ready for the highest bids. Each bag will be filled with treats for the bears. They were very enthusiastic after they learned they would be giving their designated bag to their bear and announcing the highest bidder. The interns put a great deal of thought into the bags and it is reflected in the personality of the bear and the intern that designed it. The bidding begins July 19th thru 22nd. Bags will be given to the bears on July 23rd at 10:00am. Have fun and let’s see who wins this year’s highest bid bag. 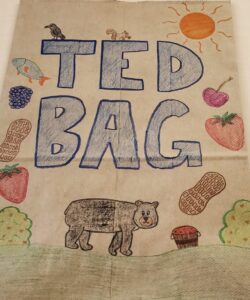 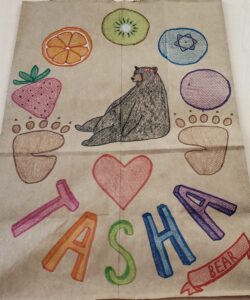 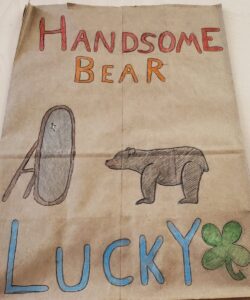 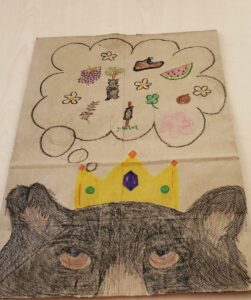 Ted has a new platform to sit on to keep dry. The interns took it upon themselves to place one of the old ramps in Ted’s den and make a platform for him. Ted loves to soak in his tub but then the water (that can weigh up to 8 pounds) carries along with him when he sits or lies down and soaks his area. Now he has a place that is dry. Thank you interns.

Lines of storms have been going through the Ely area for the past few days. It seems to only bother Lucky, or at most, the thunder bothers him. Our big handsome bear becomes quite uncomfortable with the large rumbling bursts of thunder and then lightning.

Lucky was seen this past week vigorously digging on the mound. He exposed the tunnel to the groundhog’s lair. What were his intentions in doing so? Was he going to lie in the nice cool sand? Dig his own den? Or was he searching for the groundhog?

I can safely say Holly is out of estrus, ignoring Lucky and back to herself. What does that mean? Holly is very dominant here. She walks away when necessary. If Lucky is persistent, she will not hesitate to whack him if he intrudes too much. She avoids Tasha but is also choosing to play at some intervals of the day.

Bears are very solitary animals and even though the bears share 2.5 acres they can disappear for hours. Tasha has spent more time in the last few days in the viewing area. She picks up the treats left behind by Holly and uses the stand-up feeder. She is very cautious as she looks to make sure Holly isn’t approaching to chase her. She was digging by the falls, did she find ants, ground hornets? Only Tasha knows.

If any of our dedicated followers are checking out Amazon Smile, we are currently out of cranberries and apricots and we would appreciate any of these purchases from our Amazon Wishlist.